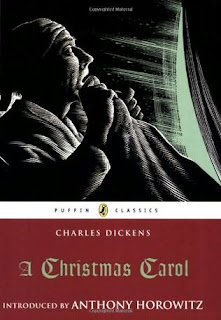 Of course it was a story that I’m completely familiar with from the many movie versions – my favourite being the 1951 version starring the great Alistair Sim. The renowned miser Ebenezer Scrooge is visited by his long dead business partner warning him that he must change his ways. To help him reform he is visited, one long Christmas Eve night, by three spirits: the ghosts of Christmas Past, Present and Future. Each show him different aspects of his life and show him that there are other things in life than money and account books. There is story here, and especially back story, character development – the whole point of the narrative after all – and even a surprising amount of humour. I remember my friend’s girlfriend at the time telling me that she enjoyed Dickens primarily for his humour and I didn’t believe her – until now. The ghostly aspects of the story where equally surprisingly spooky (if not actually horrific) and a bit strong for what is often seen as a children’s story today. Small children in particular might have nightmares if you read this to them at bedtime! But the driving force of the story, rather unapologetically blatant to be honest, is that of a morality tale. Life is difficult, it says, and most especially for the poor. Without Charity, most especially at Christmas, life become unnecessarily hard for all concerns. Dickens was clearly putting forward the idea that a lack a basic charity cuts both ways.

As A Christmas Carol was only 107 pages in my printed copy two further novellas where added which had a common supernatural/Christmas-New Year theme. They were The Chimes (FP: 1844) and The Haunted Man (FP: 1848). I found The Chimes very confusing to begin with. It revolved around an elderly porter – hired to deliver letters and parcels in London – who dotes on his young and (naturally beautiful) daughter who is about the get married to her labourer boyfriend. After a random meeting with some local dignitaries the couple is persuaded to go their separate ways and tragedy ensues. Years pass and then, out of the blue we discover that the porter has apparently been dead for years and has been watching his daughter decline from his place ‘on the other side’, then it’s all change again and a second scenario is played through. Finally, at the end of the narrative, we discover that the old gent was playing through possibly life choices through his mind and speculating on the outcomes of each. As before The Chimes is essentially a morality tale about the attitudes of the Middle Class to the poor and the encouragement of Mutual Aid in poor communities to mitigate against the worst excesses of ‘the system’.

A much better story was The Haunted Man which centred on a teacher in a dilapidated school who went everywhere as if he was haunted by a malevolent spectre – which was actually not far from the truth. Something dreadful had happened in his past that he could neither deal with nor forget and it was crippling him as a person. Finally on New Year’s Eve the spirit offers him a deal – that if he agrees to it the spirit can make him forget the harm done to him forever. After some hesitation he agrees. Only then does the spirit reveal the catch. That for the rest of his days anyone the teacher touches will also forget everything bad that happened to them in the past. Thinking that he can help mankind to a better place just by touching them he goes out to help relieve their pain. Only gradually does he make the terrible discovery – that without the pain of the loss of love the memory of the love itself begins to fade. Soon all emotion is lost and all that is left are animal passions, hate, fear and avarice. Without the shadow cast by the light all too soon there is no light to relive the shadow. Both good and bad experiences make us what we are and without the bad to learn and grow from the good is much diminished in contrast. Not having read this before (or indeed any Dickens) I thought this was the best of the three stories presented. Overall it was a good introduction to Dickens – of which more later!

You chose an interesting time of the year to read A Christmas Carol!

The novels are really excellent, you'll enjoy them, I'm sure...

A Christmas Carol has come to play an important role in our culture. It is so ubiquitous.

Dickens message of charity and how it relates to the dark aspects of life can be found in a lot of his works. I will be posting aBlog on Oliver Twist in a few weeks where I will also explore this a little.

I have not read Dickens's other Christmas stories. I am going to make it a point to do so next winter.

@ Stephen: Well, to be honest I was expecting to read it much sooner but I'm not able to target my reading as accurately as you often manage.

@ Mudpuddle: I do hope so. I bought the complete works some months back so intend to read them all except for Edwin Drood. Don't see the point in reading a mystery novel that was never finished!

@ Brian: I'll look forward to your Twist review. My next Dickens will be 'Tale of Two Cities'. Essentially I'm reading them in *size* order starting with the shortest! [grin]