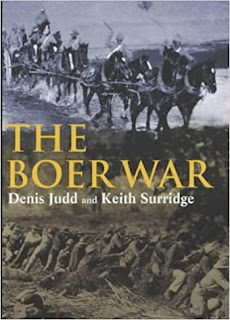 They just wanted to be left alone and to be able to carry on their lives how their fathers before them had lived – before the coming of the English and their Empire. But when things looked as if such an accommodation inside the Empire’s boundaries wasn’t possible they did the only thing they could – they left on a trek further into the African wilderness to carve out a new life. There they hoped that things could continue as before. Until they found both their economic salvation and a lure the British could not easily ignore. In a short space of time the retreating Boers – Afrikaans descended from the original Dutch settlers – had not only discovered both diamonds and gold but two of the largest deposits of each in the world. Having a potentially unfriendly and independent nation on the edge of Empire with that kind of resource behind it was at best a problem. At worse it could destabilise the region and threaten the coaling station to India. The Boers needed to be absorbed into the Empire – by choice or not. After increasing pressure the Orange Free State and the Transvaal decided they had no option but to fight for their independence.

It looked on the face of it like a foregone conclusion. It was a David and Goliath fight where David had no chance at all. Even the Boers thought they couldn’t win but if they gave the Empire a bloody nose early on they’d be in a better position to bargain. No one was more surprised than the Afrikaans forces when they handily defeated the British in their first encounters. This was not a war that would be over in weeks or even months. As soon as this was realised the British delivered a massive force to Cape Town with the express mission of defeating the rebels and saving the honour of Queen and Country. It was not going to be easy. The Boers were no native force unused to modern warfare and modern weapons. They had some of the best rifles in the world, an intimate knowledge of the country and, most important, total mobility. They could hit anywhere which forced the British to be everywhere. It was a whole new way of warfare and the British had a lot of catching up to do.

Any Brit of my age will know about the Boer War, it was a top subject in our History class about Empire, the start of the 20th Century and the lessons that the British Army were forced to learn during the conflict that went a long way to prepare it to fight in a very different conflict just over a decade later in France and Flanders. What this book had, in spades, was both the level of detail missing from those history lessons so long ago as well as the ability to tell the full story from both sides. Like all wars, especially more modern ones, this was a complex fight full of heroism and tragedy. It called the Empire into question like never before and called into existence the concentration camp where thousands of men, women and children died in order to deny the Boer Commando units local assistance. Initially seen very much as a side-show of Empire it was a war that deserves to be remembered for a whole host of reasons and the authors do a very fine job indeed of covering the events. Recommended.

Posted by CyberKitten at 9:42 pm

not very well known nowadays... but has a lot of lessons for the ambitious politician...

I read this book a few years ago. I agree it was informative and well worth the read.

Here in America almost nothing is taught about this conflict in schools and it is not generally well known.

Among the many things of note about this conflict was the involvement of a young Churchill and a young Gandhi.

@ Mudpuddle: It was an important conflict in many ways. A few of the top ranking generals on the Allied side fought there and some cut their teeth on that conflict before going on to MUCH bigger things in France. It also foreshadowed the decline of Empire in a real way.

@ Brian: I guess there's only so much history you can teach and that the US had zero skin in the game?

You bring up a good point about Gandhi and Churchill. It's where Gandhi started on his political path and where Churchill started his path to fame and power. Interestingly Arthur Conan Doyle was there too - as a doctor. Both Churchill & Doyle later wrote about their experiences which should be interesting reads!

This is one I should read -- I know nothing about the Boer war other than that it happened. I've never been interested in the African colonial projects except to the degree that they affected the main countries involved -- causing conflict between England and France, for instance.

@ Stephen: Definitely a book for you I think. Political & Economic factors, individual 'Great Men' - both great and not so great - technological factors, developments of tactics, knock on effects to future wars and to the future of South Africa itself.... PLENTY to unpack there!

I do like books that tell both (or more) sides of a story. Especially when it is empire against local people.

Perspective is everything I think. You more you have of it - the more rounded and accurate view you have of the world. Everything has at least two viewpoints. Why only see things from one of them, right?