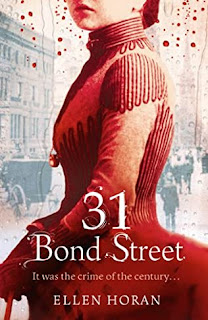 New York, 1857. No matter how calculated it was still an act of desperation. With two teenage daughters needing a husband before long Emma Cunningham needed stability, financial security and a suitable address. In other words she needed to marry – and soon. She was fortunate in one way – despite being a widow she was still young and still beautiful enough to entice a suitable man into her orbit. She was also worldly enough and practical enough to realise that she might have to sleep with him a few times to bait the hook. After all desperate times required desperate measures. As her financial situation worsened her luck seemed to change. On holiday she briefly crossed paths with a fellow New Yorker dentist Dr Harvey Burdell. He was ideal – young enough without being naïve, rich enough without being out of her reach and interested enough in Emma to consider a relationship beyond friendship or a brief dalliance. After a short time in her company he seemed to be charmed enough by her to offer her rooms in his house and a position as housekeeper. It was an ideal opportunity to work on the good Doctor and bring him around to her way of thinking. As she agreed to the arrangement she could already hear wedding bells in her near future. But once in the house things do not go as she’d hoped. The good Doctor has plans too – plans to be rich off the expansion of New York’s docks and trade with the South. Plans that keep him out of the house for longer and longer periods including overnight. Does he have another mistress? Is he just using her as an unpaid housekeeper and occasional bed partner? Is there any future for Emma and her daughters or will she need to cut her losses and move on? Just days away from making her decision it is made for her. Alerted by the screams of the cook she finds her future hoped for husband lying in a pool of his own blood. With the house still locked up from the night before there is only one suspect – Emma herself – and the local DA is out to make a name for himself on the way to being elected Mayor of the city. Innocent or not Emma will hang…..

Based on a real crime that shocked New York in 1857 and a trail that made reputations this was a very entertaining murder mystery that actually kept me wondering almost up to the end. Emma was far from innocent and had what could be called a colourful past. However, did she or could she have killed her soon to be/hoped for husband? That was indeed the question raised both in the subsequent trial (I was rather disappointed that the trial didn’t figure more prominently – which is about my biggest criticism of the book) and in a series of flashbacks looking at actions of the main characters including the victim who had a very colourful past indeed! Well-paced and containing some very well drawn characters – Emma’s defence lawyer and his wife where to me the stars of the show and I’d like to see them in future novels – this was an entertaining romp which easily kept me turning pages and made me want to learn more about the time and place so ably rendered in print. Recommended.

Posted by CyberKitten at 9:26 pm

sounds like a worthwhile expenditure of energy and effort... to read it, i mean..

@ Mudpuddle: Yes, I certainly didn't feel cheated either with the cost or the time it took. It was entertaining, kept me guessing and made me think about stuff..... and took me away from the real world for a while which I think we all need right now.

I guess it was foolish of me to expect you to tell us if she did it or not. But you made me want to know!

@ Judy: I'm generally careful with spoilers - BAD memories of giving things away! Made some people VERY unhappy with me.... [lol]