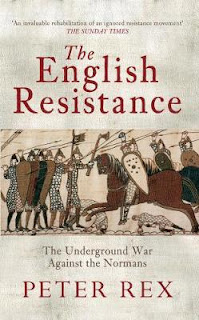 Just Finished Reading: The English Resistance – The Underground War Against the Normans by Peter Rex (FP: 2004)

After the loss of Harold at the Battle of Hastings all it seems was not lost. Although the King was dead, as were many of his best men, others across the Kingdom had yet to fight. More importantly there was a possible successor to Harold who had a counter claim to the throne to rival William the Bastard – Edgar the Aetheling. But in the Occupied Zone still others, for a variety of reasons, where already collaborating with the invaders. William was consolidating his position. Before long he and his victorious army would be marching north into the Free Zone to stamp his authority on his new Kingdom and, at last, pacify the country and bring it fully under Norman control. Little did William know just how long it would take and how much devastation he would need to inflict upon the English to bring them, reluctantly at last, to heel. Years after 1066 ‘rebels’ operated in the hills and forests, in the ravaged lands and the fens, attacking Norman forces whenever the opportunity presented itself. Widespread killings of Norman troops throughout the country became so common that new laws and harsh penalties where created to bring them under control. England may indeed be occupied but it was far from pacified.

One of the things that really struck me about this excellent little book was the way the author compared the Norman invasion and subsequent occupation to the German invasion of France in 1940 and the subsequent Occupation and Resistance. France was only freed after the 1944 Normandy Invasion something that never happened (and was actually unlikely to happen from the possible liberators in Scandinavia) and would have been unlikely to free themselves even at the height of Resistance activity – although without access to alternate worlds this is unlikely ever to be settled one way or the other. Likewise, a fractured and hunted English Resistance was highly unlikely to repel the Normans without substantial outside help. The other thing that really stuck out was the author’s revelations/speculations about the resistance fighter Hereward (NOT the Wake!). Interestingly he had been a hero of mine since my school days after the history teacher sold him very much in heroic guise – probably against guideline but, equally interestingly, there is still after the passing of over 950 years Norman and Anglo-Saxon factions both in the world of historians and in the general population. Despite my Celtic roots from Ireland I’m firmly in the Anglo-Saxon camp!

Of course its endless fascinating to speculate what might have happened if Harold had triumphed at Hastings. If I had access to a Time Machine I’d be about half a mile away from Senlac Hill with a sniper rifle looking for William. Of course that presupposes that Norman society completely replaced the Anglo-Saxon one – which in many ways it didn’t. Many elements of Anglo-Saxon life and governance lasted long after the crows had their fill on the countless corpses generated by the Norman Invasion. There might be a LOT of Norman churches still standing but the services are more than likely to be attended by those with Anglo-Saxon roots rather than Norman ones. As you can tell the events surrounding 1066 are still emotive – at least for me. So much so that I’ve created a 1066 label over on the right. This certainly won’t be the last book on the subject here. Recommended for anyone interested in one of THE seminal moments in British history.

Posted by CyberKitten at 9:58 pm

I know the basics of the history of this period, but only the basics. The time seems fascinating and the history is obviously important. The book sounds awesome. I need to delve into this time period a bit.

i read Chas. Kingsley's book at an early age... i vaguely recall making a wooden sword and attacking the cat which merited me a physical chastisement by one of the parents: great book!

English would probably be a lot different if the bastard hadn't won, that's for sure!

@Brian Peter Rex has a LOT of Anglo-Saxon books. CK has gotten me hooked on them..

@ Brian: The label List over on the right will give you some ideas for books on & around the subject. It's definitely a VERY important moment in British history which is why so much has been written about it - and continues to be written.

@ Mudpuddle: Taught correctly the whole Hastings thing can be very inspiring! [lol] What did the cat do? Hide or fight?

@ Stephen: SO much would have been different - art, architecture, language... I do wonder how the rest of European history would've been different? Rex is good isn't he? Much more on that period - both fact & fiction - to come.

Congrats on the new label. All I know is the date, 1066, the Battle of Hastings, and William the Conqueror. All else I know is that England and France were at war off and on for centuries. I have been delving more into American history lately. You know, none of it is pretty and I can understand why you have strong feelings!

@ Judy: Just don't get me started on things like The Battle of Britain - even watching movies about it can start me off being very emotional... [grin]

England & France were at war or between wars for most of their history. Even today LOTS of people here either don't like or don't trust the French just because they're French! We've only really been proper allies since just before WW1. Much more on 1066 & our 'relationship with France/Europe to come... and there might even be a bit of US history too... [lol]