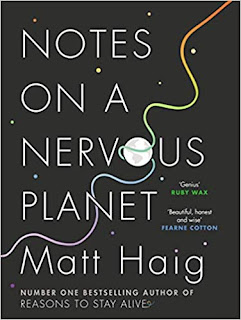 It came seemingly from nowhere – without reason. He was stuck, as if struck by lightning, into immobility. In the middle of a crowded shopping Mall he couldn’t move, overwhelmed by a sudden rush of terror. His girlfriend (and later wife) tried everything she could to get him moving again and, finally, she did so as tears ran down his cheeks as he moved slowly to the nearest exit. Although not his first panic attack it was one of the worst and, looking back, the one that made him determined to understand exactly why this was happening to him and to find ways to live in a world that made him so anxious so often.

I’m not exactly sure why I picked this book up a year or so ago. Sure, it was on offer but lots of books I pick up and put back again are in the 3 for 2 pile at my favourite book store. It’s not that I’m particularly nervous. I did have my one and (so far) only panic attack over 25 years ago whilst on a train on the way to work one morning but I wasn’t looking to this book to explain that. Interesting the author and I had (eventually anyway) a similar approach to the incident although to be honest my ‘attack’ was nowhere near as debilitating as the author’s. I felt a sudden wave of panic wash over me. It was as if I was in danger of imminent attack. My flight response was turned up to 11 but I was on a speeding train – unable to go anywhere until the next station. So I did the only thing I could – I threw all of my mental resources at it in an attempt to understand WHY I was feeling this way without any obvious external reason to be so. For about 10 minutes I worked at it eventually coming up blank. It was a normal day. There was nothing at work or in my life that could elicit the reaction I felt so I could not, and cannot to this day, explain it. After about 10 minutes the feeling vanished as quickly as it arrived. I got off the train at my usual stop and went to work musing on what had just occurred. Since that event nothing like it has ever reoccurred. I have had a few bubbles of random anxiety pop into my brain over the years (odd little things that they are) but, after acknowledging them, I wait until they fade which they do within 20-30 minutes. So I can certainly appreciate – to some extent at least – what the author has gone through and continues to experience.

This is an interesting little work full of sage advice. It’s the kind of book you can dip into for a thought of the day or to re-read a list of do’s and don’ts on negative thoughts, social media use and much else besides. He makes some very good points that I’ve seen alluded to in other books especially about social media and Internet use in general. Rightly he says that, because world news is immediately in our face 24/7 there’s no opportunity to pause and reflect. Everything is happening NOW. Big Picture analysis is almost impossible with alerts from multiple platforms ringing in your ears day and night. This, the author found, was his centre of anxiety – the all-consuming need to be constantly informed and to correct people on the Internet no matter that he hadn’t slept for 36 hours. Sleep – or lack thereof – that was another thing. We live in a 24 hour world now so if you don’t want to switch off you no longer have to. We have left the age where TV channels closed down at night or when we only knew people in our own Time Zone. It is not a world designed to make us comfortable in our own skins – most especially when we are encouraged to compare the worst of ourselves (in our private world) with the best of others (constantly on public display). All of which is encouraged by the fashion and cosmetic industries – and their fellow travellers. Consumerism is, by its very nature, designed to make us feel inadequate on every level and it’s very good at its job.

If you’ve ever experienced social anxiety or even had a panic attack at any point (even before the present weird time we’re living through) or know someone who has and want to understand things from the inside then this could be a useful way in for you. The author doesn’t hide how rough it can be to go through this sort of thing (and on your loved ones too) but does offer a great deal of useful insight into the condition, the causes and some coping strategies that work – at least for him. Recommended.

Posted by CyberKitten at 6:46 pm

Sounds like one worth considering! This corona business has made things worse, with everyone stuck browsing facebook all day. A couple of my friends have had sustained anxious periods in the last two months where only distractive company kept them sane.

Places like Facebook & Twitter are a cross between a hothouse and one of those rooms full of mirrors reflecting everything back and distorting it. It can easily get out of hand - especially if you start buying into all of the fake news, conspiracy theories and misinformation already out there.

I'm SO glad I never got sucked into the whole Social Media cesspit.

i've frozen a couple of times when confronted by too many people... or choices... never associated that with panic, tho... but now that you mention it...

Even the name of the condition is panic inducing! I have not had one of those attacks but it sounds so terrible. Social Media is often pure poison for me, so I take days off at a time. Even I had to dial it back on blogging. As always, reading is my way of working out any sort of anxiety or confusion. It never fails me.

@ Stephen (again!): It's an interesting and quick read. It won't change the world but it does give plenty of things to think over. Facebook is responsible for a lot of the bad side of Social Media I think. Their attitude to some posts are very lax and probably simply dangerous.

@ Mudpuddle: Not a fan of crowded places myself. It's one reason why I don't go out shopping in the weeks just before Christmas. At that time I'm fighting a constant feeling of the need to leave.

@ Judy: Yeah, I blame Social Media for a lot - especially among the young who already have enough to deal with. I'd HATE being a teenager these days. The very idea makes me want to curl into a ball. Reading is a great boon in so many ways!