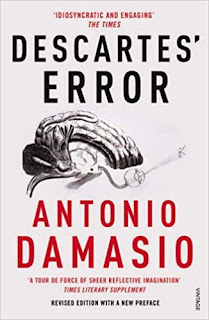 I’d be the first to admit that I’m not a scientist. The last time I studied science in an academic setting was when I was 19 and trying (for the 2nd time) to get into University. As that was over 40 years ago I’ll leave you to imagine how out of touch I am with most things scientific. I have, however, maintained a steady interest in science since my late teens – mostly things like Cosmology, Quantum Dynamics, Computers and Evolution but also things like Human Biology hence this book. Part of that interest is, to be honest, driven by the natural process of aging. I’m interested in what’s coming down the road at me and I’d like to be prepared for it. Mostly it’s just because I’m interested in things which just happens to include why and how I ‘tick’.

I think I tried to read this book back in the 90’s. I do have a vague bell going off (although that might just be my tinnitus) about picking this up at some point previously maybe from a library somewhere. The brain is, obviously, an interesting subject as we all have one and it’s where ‘we’ live. Now I’ve long held the belief that we are our brains and that there is no ‘mind stuff’ that’s separate from the physical brain. The reason why the mind/brain link hasn’t been found is that it isn’t there to be found. The mind and brain are essentially the same thing. Damage the brain and you change the person – you change their minds (often permanently). I know it’s in many ways more comforting to think of us just as ‘meat’ even if it’s as meat machines being driven around by controlling minds but I stopped thinking that a long time ago.

Anyway, to the book itself and why I DNF’d it. DNFing a book is a very rare event for me and I don’t do it easily. My ‘miss’ rate is often no more than 1 book every other year. I’m usually very good at picking books I’ll enjoy or at least finish. The problem I had with this wasn’t so much the content as the style. The author obviously knows his subject but I felt that this book wasn’t really directed as me as a reader. One thing was that I struggled with some of the terminology which slowed my reading too much as I had to ‘switch gears’ to understand or remember which bit of the brain he was talking about. I did speed through his descriptions of various accidents and patient histories held as examples of how brain injuries caused this behaviour and that but I found myself skipping through the more technical bits which I thought were primarily written for medical students. I did agree with his overall premise – that emotion cannot and should not be left out of the thinking equation but I couldn’t help thinking that he approached the idea too tentatively and too slowly to hold my attention. I suppose that what I’m saying overall is that this wasn’t the popular science book I was hoping it was and that other books ahead of it were calling to me – a case in point is that I stopped reading this about 100 pages to the end (160 pages in) and yet read 120 pages of my next book in a single day. Although interesting in many ways this just wasn’t the book for me so not recommended.

i'd totally recommend Oliver Sacks on brain related topics... and i totally agree on the brain/mind thingie... we're just animals like your average snail or banana slug; what we consider consciousness is related to how the brain circuits process sensory input. i could, and have in other locales, go on about this for a long time... haha

I haven't read any Sacks (yet) but he does keep popping up as a recommendation. I'll see about checking him out.

Agreed that we're 'just' animals that happen to be conscious. Its a definite evolutionary advantage but can be a burden sometimes!

You make your case well. Writing style is so important.