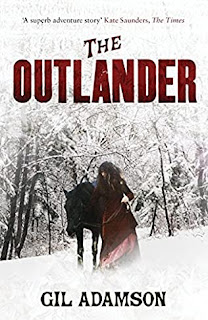 The Canadian wilderness, 1903. Mary Boulton, 19 years old, and self-widowed is on the run. She has no idea what to do except flee. With no money, no idea where to go and no knowledge of where she even is, she knows that her days among the living are numbered indeed. Sleeping in ditches after walking herself to exhaustion she can only hope and learn to accept her fate. Helped by an eccentric spinster her only answer is betrayal – with the theft of provisions and a horse. Her only driving ambition is to escape beyond her husband’s brothers reach. But where to go to avoid such implacable trackers. Only one place – up into the mountains, away from people, away from civilisation. However, Mary quickly realises that she has no skill for survival. She could be surrounded by food and not recognise it or simply freeze to death on the mountainside. On the edge of collapse she is discovered by another refugee from civilisation. A man simply know to the authorities and the North West Mounted Police as the Ridgerunner. Despite saving her life and despite a growing attraction she cannot stay in the mountains forever and he can never return to town. When they part they both think it is the end of things but Fate, it seems, has other ideas. Finally at peace in a mining camp every time Mary looks up into the hills she wonders what happened to the Ridgerunner. Meanwhile the brothers have hired an expert tracker and they are closing in on their quarry with revenge very much in mind.

I’m really not surprised that this stunningly good novel was shortlisted for The Commonwealth Writer’s Prize. After turning the last page and repeating the last two words of the narrative several times over – with a large grin on my face – I was already convinced that this was the best book I’d read in 2020. Mary is a great character who develops throughout the novel from a frightened and hunted 19 year old into a very capable young woman. The Ridgerunner, likewise, develops from an enigma barely able to interact with others and even an almost stereotypical ‘mountain man’ (although he was nothing of the sort) into someone who you couldn’t help but respect and root for. The cast of secondary characters – the Preacher in the mining camp and the owner of the camps store – are brilliantly rendered and were living breathing creatures full of hopes, dreams and all too real faults. No one here is perfect – far from it – but everyone in the book is a believable human being no matter the brevity of their time ‘on stage’ – from a family of American horse thieves to an Italian miner who can understand English perfectly but only speaks in Italian (which no one can understand!). For that alone this is worth reading. In many ways this is both a coming-of-age story (watching Mary grow beyond her original confines) and a love story between Mary and the Ridgerunner but there is FAR more to it than that simple distillation. There is a lot going on here. The story is very much a character driven tale of hope over adversity and not just for Mary. Nearly everyone encountered in this excellent novel are damaged in some way and are either living with the pain on a daily basis, coming to terms with loss or looking for a form of redemption. There is more of a lyrical quality in this book than I have experienced for quite some time. It was, at times, quite beautiful and I was deeply impressed by the writing skill of this first time author. Naturally as soon as I put it down I wanted to read her other works. At this point I was presented with both bad and good news. So far, this is her only novel. But the good news is that in 2021 she’ll be publishing a second – about the life of the Ridgerunner. Sounds like I’ll be buying a hardback next year…… Very highly recommended.

Posted by CyberKitten at 5:46 pm

sounds like an interesting study of individualism... usually i like books in which the characters are as little like humans as possible, but i admit this one intrigues...

Sounds like an excellent read. The growth of the characters appeals to me.

I am sold, this sounds amazing - certainly above and beyond your everyday crime novel.

Excellent review, CK! I am putting this one on my lists.

@ Mudpuddle: It was a very interesting read on many levels. Quite enlightening.

@ Unknown (V V?): It's only really a crime novel (sort of) because of the original motivation. There's crime *in it* but it's much more than that.

@ Judy: Oh, I think you'd *really* like this one! If you do get around to it I'll look forward to your thoughts.