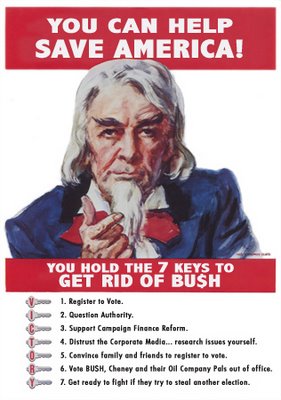 Email ThisBlogThis!Share to TwitterShare to FacebookShare to Pinterest
Labels: Poster

I wasn't that opposed to this poster until #7.
Ridiculous people still cry 'foul' about the election--poor sports.

Some very strange goings on during both elections Sadie... Even from over here they looked... questionable....

I don't think that, at this point, much more needs be done. I mean, it would be nice if the Dems had a plan, but Bush, Cheney and company are doing a better job of destroying themselves than anyone else could hope to do. They have become experts at shooting their own foots... well, except for Cheney anyway.

Mike said: Bush, Cheney and company are doing a better job of destroying themselves than anyone else could hope to do.

Unfortunately no one seems to be taking adavantage of it. If such a corrupt & incompetent Government existed over here they would have been crucified by the opposition & the press LONG ago....

Having got back from the US last night I can say that there appears to be very little criticsm if any of Bush in the media, print or TV.

" If such a corrupt & incompetent Government existed over here they would have been crucified by the opposition & the press LONG ago..."

Tony & co would never do any of that stuff that we despise Bush for, no way. And all us Brits would rise up & rebel if he did?

Of course, we have to ask, who would we put in his place? But not having a good alternative is not really a reason to sit back & pretend it's all ok!

For all I hear on the Right about the leftist liberal media, the very lack of criticism of this Administration should show exactly what type of media we really have.

As for the Dems not taking advantage of the situation, they're grossly out numbered in both the House and Senate, so trying to get investigations or hold anyone accountable is regularly stalled. Further, the Dems have been so consistently successful at destroying every good thing that comes their way that I think they're afraid to respond because they're sure it will backfire.

As for the last national election, I was an election supervisor for our local board of elections and saw way too many black people turned away and given the run around, against what the election laws said should be done. I also have family and friends in other states and know of problems on election night with both the voting machines and people being turned away. Was it deliberate? Was it misinformation? Not having been in the other locations, I'll give them the benefit of the doubt that it was human error and misinformation.

In my area, even though it started out as human error, when they were told to let the people vote, by me, their supervisor, they argued that it would be a hassle, more sorting, and those good people didn't mind going to another voting location anyway. It seemed like every time I turned around, I saw black people either leaving without voting or arguing with the volunteers that they'd already been sent to four other polling places. Some of these black folks were poor, elderly and not able to spend hours traveling all over town trying to find a polling place where someone would let them vote. In Maryland, we had a uniform ballot for the last national election, so in theory, as long as you presented a valid Maryland Driver's license, you would be able to vote anywhere in the State, the ballots would be rerouted to your home polling district immediately after the polls closed. And your local board of elections would sort out the ballots and count those from registered voters, then check the others to see if they registered late or if there was some issue with their status. Sorry to say, it didn't always turn out that way in my area. I caught as many as I could before they were turned away. Even chewed out one volunteer for continuing to do it after being told not to, but over the more than 14 hours I was at the polls, I'm sure a number of people were turned away needlessly that I didn't catch. *sigh*

What Sadie said. Additionally, can I point out the fundamental ridiculousness of people who can say:

"7. Get ready to fight if they try to steal another election."?

I mean I'm a Brit, and even I've heard of the 22nd Amendment - something which has apparently flown right past these geniuses:-/ Not to mention the fact that the guys getting "ready to fight" tend to be gun-control types, whereas the second amendment enthusiasts are mostly Bushies. Want to bet on who'll win that one?

And lets not get into the last two elections - to be blunt, the big story of those was the failure of the left to steal them, not the success of the right in in stealing them (it was Gore who sued in 2000 not Bush, and what happened in Wisconsin and Oregon in 2004 was far worse than anything in Ohio).

Random said...
to be blunt, the big story of those was the failure of the left to steal them...