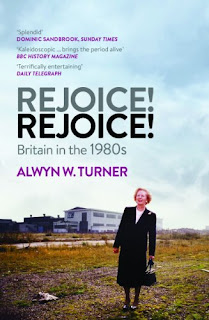 The 1980’s were my decade and not just for the music. I moved away from home for the first time – and never went back except to visit, I went to University and, after a short period of unemployment, moved to London and a job that lasted me over 30 years. So, yes, a pretty important decade for me.
But the dominant thing about the 80’s was – apart from the music – the Prime Minister: Margaret Thatcher. She dominated the decade the way few (if any) PMs have done before. She in many ways defined the 80’s and British history of that time cannot be spoken of without reference to her. Rather surprisingly I voted for her (the first time I voted age 19) in 1979 and again 4 years later. Reading (and remembering) about the opposition at that time which, as today, was a total shambles it doesn’t surprise me that she got my vote. I can’t remember who I voted for in her third term though. I suspect it was Labour – in the guise of Neil Kinnock – but I’m not sure. But like most of the country I’d turned against her at that point.

Some of the reasons I tried hard (and repeatedly) to go to University had to do with the high unemployment rate throughout the 80’s. 3 years out of the job market plus leaving with a degree, I thought, would both allow things to improve (they didn’t) and make me more employable (it didn’t). But finally I got a job in the capital and experienced – or at least saw the fallout from – the Poll Tax riots and, of course, the IRA bombing campaign and the heavy handed government response, and it still amazes me to this day how quickly we got used to seeing police officers carrying sub-machine guns in body armour on the streets of central London where before we hardly saw any armed police anywhere.

Being the Iron Lady and playing up to that iconography at every opportunity would always result in opposition and it did – from the Miners, Left wing politicians and TV comedians (and not forgetting the BBC). The 80’s were undoubtedly a great era for stand-up comedians and some of the best TV drama and soap opera of any modern age – and this was when we only had FOUR TV channels for most of the decade supplemented by SKY TV with its multiple satellite channels from 1984 onwards. I honestly loved Channel 4 in those days and I’m sure that the Government regretted its direction that the new channel should cater for ‘alternative’ tastes – which it took to with a gusto! In many ways the 1980’s was when everything changed. Our military decline into 3rd world status was recognised and halted after the Falklands War, nationalised industries were sold off and never went back, greed became good, industries fell by the wayside and where deliberately left to die whilst the Stock Exchange and the Banking industry were lauded and rewarded handsomely, race, gender and sexual identity all became issues and where endlessly debated – it was a chaotic, vibrant, frightening and exhilarating 10 years and the author brings that to life in spades. I laughed, I sighed, I recognised, I frowned and cheered and mostly I remembered events, people and – one more time – the music of the age. I’m not sure how much this will interest my American readers but if you lived through those times or just want to know how it was in Britain during those tumultuous years this is definitely the book for you. Recommended. More 80’s to come!

Posted by CyberKitten at 9:54 pm

sounds stunning... lots of bad vibes over here fot the Thatcher years, i think... i really wasn't paying a lot of attention... after years of trying other things i got my degree in geology in'81; at graduation the president mentioned how bad the employment situation was, especially for geologists...

I barely remember the eighties, being born in the middle of them. Love the music, though.

So have you only had the one job-job? That's amazing these days.

@ Mudpuddle: Apart from Reagan I'm afraid my knowledge of 80's America is.... limited. I guess I was concentrating too much on surviving the 80's over here.... Kind of exciting times but not often good ones for those @ the shallow end.

@ Stephen: Yeah, can't really fault a good portion of the music. Plenty of dross as always but more gold than usual I think.

I did end up working for the same organisation for 32 years, yes. But I've had lots of different jobs inside it - from general admin stuff, to help-desks/IT support, to project management and a few creative jobs too...

I spent the 80s with my head in the sand as far as world events went. That is all I am going to say at this point. Now I would find this book extremely interesting.

I'm planning to read 2 more on Britain in the 80's over the next few months. I find it endlessly interesting. I love finding out about what was going on in the background causes having lived through the foreground effects!

I just finished _Years of wonder: A novel of the plague_ by Geraldine Brooks. It was a fictionalized account of the town of Eyam, England and how they isolated themselves in their community when they realized the plague was there so as to not infect anyone else. We could learn a lot from them.

@ V V: Like now the only way to cope with it was to isolate. At least we have the hope/expectation of a vaccine at some point!