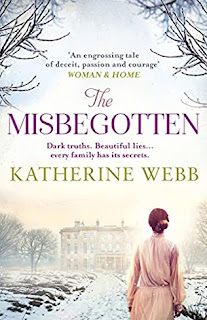 Bath, England, 1821. It is Rachel Crofton’s happiest day – although she must remember to think of herself from now on as Mrs Rachel Weekes. Not only is she now married to a handsome man ‘on the up’ but he has taken her away from her life as an unappreciated governess to the ungrateful children of rich landowners. Moving to Bath has brought up some bad memories of her previous life in a somewhat higher social station but her future is looking bright – even from a somewhat lower standing. Until she meets Starling and everything starts to change. Starling can’t believe her eyes. Rachel is, almost, the image of the lost and lamented Alice who saved Starling that cold day when she arrived seemingly out of nowhere and was adopted by Alice as a sister/companion/servant hybrid. Now Starling has an idea for the perfect revenge – she will introduce Rachel to her employer and to the man who she is certain killed Alice in a fit of jealous rage. But Starling has no idea how far the ripples of her plan will go and how many lives they will change, for better or worse, once that first act takes place. She hopes that a mystery from her childhood will be resolved but she has no idea just how explosive the answer will be.

My local(ish) bookstore specialises in 3 for 2 offers which, naturally, I can’t resist. One of the things it allows me to do is to ‘take a punt’ on an unknown author or a genre I’m either not familiar with or not a huge reader of. Essentially it allows me to take low cost risks. Although I’m a huge fan of both mystery novels and historical novels there’s always the thought that either element simply won’t be ‘up to snuff’ and I’ll be left disappointed in the end. That was definitely not the case here! At 531 pages this is a reasonably hefty novel for me. In normal circumstances it would’ve taken me around 7-10 days to read it. It admittedly unusual circumstances – with the continuing lockdown plus my retirement – it took 3. This was a superbly crafted neo-gothic ‘romance’ where a pair of heroines (who were completely chalk and cheese) solved a mystery by coming at it from two opposite directions before joining forces to solve it together. The characters of both Rachel and Starling (to say nothing of nub of the mystery Alice herself) are quite brilliantly developed and operate from completely believable motivations. The mystery – without giving anything away – actually contains a mystery inside it which piled intrigue on intrigue without diluting either the plot or the final big reveal. Being the 1820’s neither Starling or Rachel have much or any power of control over their lives but both use their natural intelligence, force of personality and sense of justice to drive the narrative forward. Both women come up against the cold hard reality or living in a man’s world and both suffer for it. There is some shocking violence against both characters which I found more than a little disturbing so the sensitive amongst you might want to think twice before reading this novel, but I think these instances (brief as they are) underlie the precariousness of their positions and highlight how poorly women were treated in supposedly respectable society even so recently. Overall the tone of the book was wonderful, the characterisation was outstanding and the resolution of the mystery handled expertly. Being modern Gothic (or at least that’s how I’m labelling it!) it is most certainly disturbing in places so beware! But if you’re willing to risk it this is definitely a book that will stay with you (in a good way) long after you’ve finished it. Highly recommended.

Posted by CyberKitten at 5:48 pm

a recent novel that's worth reading? i'm surprised and curious... but the warnings will probably keep me away from it...

It was VERY good. I always like to give such warning in case people are easily offended or shocked. Most modern novels of this type, if translated straight into movies or for TV would probably be a 15 certificate at least. Often, at least in parts, they'd hit 18 or beyond. I guess that if they leave things to the imagination the result depends also on how imaginative their readership is too. But mostly they don't hide things like swearing (none that I remember in this), violence (a fair bit sprinkled about) and sex (some) and sexual violence (some of that too).... By modern standards this was, generally, on the mild side of things.

I love it when I take a chance on a book and it pays off! Here's to more such discoveries.

@ Judy: Until recently (with everything that's going on) I used my local supermarket to test the literary waters too. The books there - all top 30 popular books - were at around half price. I've picked up some pretty good ones there over the years.