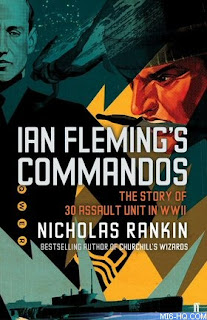 At the beginning of WW2, after the disaster of Norway and the retreat from Dunkirk, England stood alone against Germany and desperately needed to strike back in any way it could. There was also a real need to understand exactly what we were up against in the way of advanced technology and especially anything to do with the fabled Enigma machine. Without such knowledge England would be fighting against a most dangerous enemy with one arm tied behind its back. Enter Ian Fleming who was recommended to Naval Intelligence as someone who could get the job done in difficult circumstances. On being promoted to Lieutenant-Commander he had a brilliant idea – why not simple ‘nick’ enemy technology and bring it back for analysis? So was born a small commando unit tasked with the dangerous job of working behind enemy lines, stealing what they could and returning safely to the UK. Operating in Occupied France, the Mediterranean and later in most theatres of the war 30 Assault Unit was responsible for the capture of several vital pieces of enemy equipment – including the latest Germany radar units and Enigma machine parts – during daring raids that would have put Flemings later creation James Bond to shame. Drawing parallels between Fleming and his wartime experiences and his later James Bond novels adds an interesting extra level to this book. But primarily this is about an almost forgotten aspect of the war where daring (indeed sometimes suicidal bravery) won the day over impressive odds and, usually, resulted in significant gains of intelligence.

Read in conjunction with my recent reading on Bletchley Park, early aerial reconnaissance and the hunt for the V-weapons, this book adds another layer and another dimension to the story of British resistance to Germany and her Axis allies in WW2 and especially in the early days – the most interesting I find – when improvisation and thinking way outside the box where vital to fighting back with very limited resources. Of course not everything turned out well – far from it – but we eventually learned our lessons (often the hard way) and eventually got the hang of unconventional warfare in the days before we had the ability to face the enemy on equal terms. This was a gripping narrative full of fascinating details and heroic individuals seemingly doing the impossible on a daily basis. With our backs against the wall we used our native cunning to hit back in any way possible – no matter how ‘whacky’ the ideas seemed at the time. Some of them worked and some of them worked brilliantly. If you’re a fan of this kind of history or even of Fleming and James Bond this is definitely the book for you. Highly recommended.
Posted by CyberKitten at 11:07 am

Very cool! Not sure how I missed this when you originally posted it.

BTW, just received the other Tanner books in the post. :D