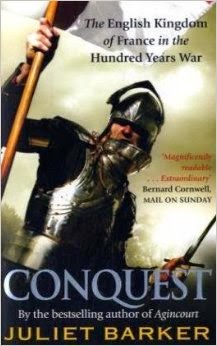 Of course we knew all about the defeat of the French in the battles of Crecy (1346) and especially the great victory at Agincourt (1415) from our school days. I wonder if they still teach that stuff. But what happened after the massacre of the French nobility? What happened to the English kingdom of France between then and when the last English troops left with the town of Calais alone remaining in English hands until it too fell in 1558. This page-turner of a book explains exactly that.

It all started well. The victorious Henry V landed his forces in 1417 and surely, steadily conquered all before him. Within a few short years the whole of Normandy was secure in English hands and the expansion continued. The French were divided and fighting amongst themselves. Some allied with the English against their own countrymen, others intrigued in the court of the young Dauphin and vied for position. For the French it looked increasingly like they would lose their country chunk by chunk until nothing was left. Then in 1422 the unexpected happened and Henry V died leaving his infant son as King in waiting. Then it all, slowly, started to go wrong. With English lords vying for the regency of both France and England while they waiting for young Henry VI to gain his majority the double-dealing, betrayal and power plays went into overdrive. With factions fighting for dominance within the English court they took their eyes off the very ball still in play in France which allowed the French to gather themselves and their forces and to begin the fight back. Of course they still had a hill to climb but the English began to make serious errors of judgement compounded by a falsely but deeply held belief that they had become unassailable. As the tide began to turn something else, something strange and inexplicable was thrown into the mix. Out of nowhere a young girl arose who said that she had been chosen by God to lead the French to victory and to place the uncrowned Dauphin on the throne of France. Known to the English as Joan of Arc she put heart into the French forces and managed to deliver several impressive victories before her all too short campaign fell apart. But that was not the end of things. After long years of war and occupation the English war chest was empty. Loans had to be asked for, pay for the soldiers was late or never arrived, men deserted or went ‘free-lance’ even signing on with forces they had been fighting weeks earlier. Defences, much in need of repair, had no work done to them. All in all it was, in the final years of the 100 Years War, a disaster waiting to happen – as a disaster it was. With alliances broken, a young King who wanted peace at all costs and a resurgent French nationalism it didn’t take much for town after town and city after city to fall to the victorious French armies. All, except for the fortress of Calais was lost. 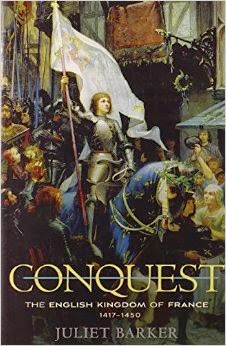 It was good to fill in this 30 year gap in my historical knowledge – especially with a quality work such as this. History isn’t often as gripping as this narrative where I found myself reading late into the evening and, rather ironically, losing track of time. But this is not history for the faint hearted. There’s a lot going on here. I’ve only very much skimmed the surface of all the convolutions and complexities of the military and political situation at the heart of this book. Honestly it makes Game of Thrones look like a simple children’s book – except that this was for real. But if you like that sort of thing – the conspiracy, back-biting, double-crossing and other unsavoury goings on – and can keep multiple and shifting relationships in your head then this is definitely the book for you. Recommended.

Posted by CyberKitten at 9:39 pm

Does this mention the Duke of Bedford's marriage with some French princess? I may have the title wrong, but for a while -- when England was cleaning France's clock -- one of the top English men was married to some Burgundian woman who really made the alliance between England and Burgundy. When that ended (with her death, if I remember), England's fortunes went south..

Yes, that certainly rings a lot of bells - including some from my reading of Phillipa Gregory novels!

BTW - There's practically 2 whole chapters on Joan which puts her very much within the context of the war which I found very interesting indeed, as I'm sure you will if you read this. I'm sure that you'd enjoy the complexity of the whole thing too.

Ooh, fun! I did a paper on Joan in my first year as a history student. She's been a source of fascination for me since...middle school, I suppose. I'll see if I can find a copy of this.