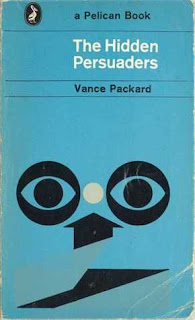 Post war America had a problem, actually a gigantic problem. During WW2 the US had become the de facto ‘Arsenal of Democracy’ producing war products on a staggering scale. Once the war was done though this manufacturing capacity – especially for military products – was no longer required in anything like that amount. So as factories converted back to civilian use it was soon discovered that domestic demand was nowhere near enough to sustain that kind of production. America’s natural overseas consumers where still recovering from the wars destruction and it was going to take some time before they could buy American products. It was down to the US consumer to take up the slack. But the average American, rich as they were (comparatively with the rest of the planet) could only buy so much or, put bluntly, wanted so much. They needed to be encouraged to consume more but standard advertising just wasn’t cutting it. Something new was required. Fortunately something new was readily available – Psychology, Psychiatry and Social Anthropology. These comparatively new social sciences were just the things that Madison Avenue needed to boost sales and boost them they did – spectacularly. With ever more sophisticated techniques being used and with more and more agencies getting on board with the new way of doing things America experienced a consumer boom the likes of which had not been seen before. Profits increased month on month, products left the factories and warehouses on the way to American (and later foreign) homes and everyone was happy – except for the end user who, to maintain economic growth, had to be forever dissatisfied with the products he now owned and the life he now lived. Welcome to the Consumer Society.

Looking back over 50 years after this classic expose of the new marketing techniques first print run the author sounds sweetly naïve. If he assessed today’s advertising industry with the same eyes he would be both shocked and appalled. The first thing that jumped out at me in this admittedly fascinating slim volume was the fact that the solution to ‘over production’ of actually cutting back on manufacturing rather than coming up with clever ways to convince people to buy things they didn’t need (or often want) with money they didn’t have (interestingly the author talked about the possibility of a future debt crisis and wondered about the rationality of an economy based on consumer borrowing) to impress people they didn’t know or like. More than one reference was made to car manufacturers who ignored the consumer requests for more fuel efficiency and, instead, produced larger cars so that their profit margin increased – manipulating their customer base to believe that bigger cars were a sign of success (and manliness) whist at the same time convincing their wives that big means safe no matter how they actually drove. The other thing that truly fascinated me throughout the entire work was, most likely, completely unintended. As with many older books the author was leaving many things either unstated or unjustified because they were obvious to everyone – himself and his readership. For example there was no need to explain or defend the patriarchy or even/especially consumer capitalism. At one point he discussed mental disorders – including homosexuality. Naturally cigarettes loomed large throughout the narrative and he referenced more than once ‘the recent cancer scare’ which the tobacco companies where doing everything to undercut. Reading between the lines I suggest that the author simply didn’t believe the cigarettes caused cancer. One other thing that really jumped out at me – again throughout the book those being interviewed both within and outside the advertising industry constantly complained that US citizens consistently failed to conform to any standards that could be easily dealt with. They were just too individualistic. But, they hoped, they could tap into a deep need for them to be accepted by their peers and not be seen to be strange or ‘un-American’ and use this to produce more conformity in the market in order to more control sales. Finally I couldn’t help but smile as the author ruminated on the idea of ‘packaging’ political candidates in order to ‘sell’ them to the public – in other words the idea of political parties or individual politicians becoming ‘brands’ in their own right. As Mr Packard died in 1996 I’m guessing that that increasing humming sound is him revolving ever faster in his grave. As interesting read for a whole HOST of reasons and a very interesting insight indeed into the minds and the culture of 1950’s America. Recommended.

Posted by CyberKitten at 6:47 pm

This has been on my definitely-get-around-to list since R.T mentioned the author in a comment. The author did several other related works, as I recall.

Yes, Packard wrote around 5-6 similar books. I'm going to try to read them all if I can get copies. He's good and this certainly was an interesting insight into the American psyche in that time period. I can now appreciate the rebellion in the 1960's a bit more!

"increased humming": LOL! i read this when it first came out and your excellent post brought some of it back... there was a lot of controversy about it at that time, with elephants belittling it and donkeys hailing it... Packard was farsighted but i don't think he quite realized the extent to which consumerism would dominate the entire world...

I have read several of Packard's books and he did indeed have his finger on the pulse of American life and what makes that pulse tick. Despite some prejudices he carried, as you mention, he mostly nails it and I wish more people would read him. It is sobering to realize how much we have been hoodwinked but essential to be able to realize the mechanisms employed.

@ Mudpuddle: I can imagine that it didn't go down well in certain quarters on publication. In hindsight he did come across as being somewhat naive but he couldn't possibly know just how bad things were going to get.

@ Judy: He certainly seemed to know his subject - new as it was at the time. Over time I'm guessing that advertising becomes less and less effective as people become used to it and build mental defences. I'm not watching much TV at all presently so I miss most adverts. The one's I do see I either 'edit out' of my mind or deconstruct and laugh at.