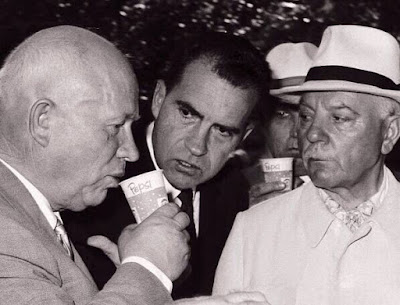 khruschev, nixon, and that french guy... and a mobster in the back... that's vodka more quality american government

Well spotted - the famous photograph were someone got Khruschev to chug back a Pepsi! You can't *buy* advertising like that.... Or maybe you can these days!!

Have you seen that film, "Death of Stalin"? Darkly amusing...it's about the power struggle that ensued after butcher joe's unhappily quick demise.

@ Stephen: Heard of it, but haven't seen it. Didn't he have a stroke or heart attack? I think it took him a while to die. Everyone was too afraid of what would happen if he lived and accused them of not helping him soon enough........