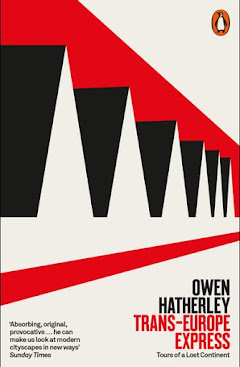 From a geographical point of view ‘Does Europe Exist?’ is not a completely ridiculous question nor is the follow up question, once that you agree that it does indeed exist, of where its borders are. A more nuanced question – from the cultural, political and architectural standpoint – is ‘Does the European City Exist?’ and, if it does, what does it look/feel like. This is the quest that the author attempts to answer in this intriguing and slightly odd book.

Is there something about urban development on the European Continent that says ‘Europe!’ if you had suddenly arrived there blindfolded by parachute? The author didn’t exactly do this (or anything close actually) but it was essentially what he was looking/asking for as he toured a number of cities and looked at their design and examples of their architecture. First he split Europe into a number of admittedly arbitrary ‘regions’ – Atlantic, Mediterranean, Central, Balkan, Baltic and North Sea. Then he picked cities from those regions as representatives and went walkabout at street level to see what’s what. To be honest there were a number of cities that I’d never really heard of or only in passing (Aarhus and Vyborg spring to mind). But the author stayed away from capitals in the main and concentrated on places with a more human scale and with some interesting history to tell (like Nicosia and the strange Fascist garden village of Arborea).

The thing that kept me turning pages in a book that was at the very edges of my comfort zone – or possibly on the edge of a new comfort zone – was both the delight of being exposed to new places and their often weird architecture and the author’s sense of humour about the whole thing. Not only was he steeped in the culture and history of the buildings he discussed but also broadened the views of the city streets to encompass how the environment they existed in came to be – from destruction in the World Wars to architectural fads and fancies to ideological and political decisions made in capitals far away. He really had a handle on the layers – historical, cultural and technological – that made up any office complex or housing project. Of course without adequate context it’s difficult enough to know exactly what you’re looking at even if it’s right in front of you – whether it’s the knowledge of where a city or the previous inhabitants of a zone got their money from or who the architect was and who he was trying (and often failing) to emulate to produce the monstrosity that is now considered to be of historic importance. All of this the author provides – and more – in spades. After reading this it would be difficult to look at an apparent simple brick wall or lamppost or municipal fountain without at least wondering why it is located just there, who designed it and why (and when) it was commissioned in the first place. What he managed to get across was that these are not just buildings or even just homes or offices, they are more than that if you can see beyond the immediate brick, stone or concrete facade. If you have an interest in urban design, architecture or European cities this is definitely the book for you. A fascinating delight. Recommended.
Posted by CyberKitten at 6:47 pm

it's nice that he did the research instead of just blathering...

@ Mudpuddle: He definitely knows his stuff. Architecture is sort of a 'hobby' for me. Not something I know huge amount about but I do find it endlessly fascinating. It'll be amazing to 'read' buildings!

This one sounds fascinating -- I always look at European cities with such longing. Granted, I know I'm seeing the 'good' parts, not the sprawl and council houses, the Paris suburbs, etc -- but all that solid architecture knitted together, shops and residences mixed in, people strolling mixing with people on a mission....it's so different from the endless asphalt, neon signs, and short-term big box stores that mark American development.