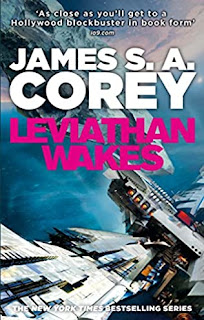 Sol System, Sometime in the 23rd Century (I think!). Something incredible has been found on the moon Phoebe. The company that found it knows that it could change everything and, not incidentally, make a great deal of money as well as making the company – Protogen – the most powerful company in the entire system. All they need is time. Time to study it. Time to develop applications. Time to weaponise it. The only way that absolute secrecy can be maintained in a system full of high-tech and very suspicious operatives is to give everyone else something far more important to think about. The idea was pretty obvious. For years now unrest has been building in The Belt – the catch-all phrase used for the inhabited areas of the Asteroid Belt and a scattering of outer planetary moons. The political movement – labelled naturally by both Earth and Mars as a terrorist organisation – known as the Outer Planets Alliance (OPA) is gaining adherents and power. Mars meanwhile has been building and enlarging its already impressive fleet and, year on year, increasing its threat to any manoeuvres by Mother Earth. Earth meanwhile, with a population of 30 billion, and depleted resources relies on the free transport of goods within the Sol system. Any planetary blockade, to say nothing of someone dangerously ‘throwing rocks’ could mean hardship at least and economic collapse at worst. All Protogen needs is a spark, a nudge to start the dominoes falling while it works on changing the world forever. That spark is struck with the destruction of the Belter ice-hauler Canterbury. When blame falls on Mars their fleet goes on high alert but when a Martian warship is destroyed in a fight with ships of a design never seen before some suspect that other players have joined the game. Has Earth decided to become involved? Has the Belt developed a capability previously thought beyond them? What exactly is going on out there in the black of deep space? It’s time to find out before the shooting really starts!

This is the first book in the Expanse series (yes, I KNOW… I’ve just started ANOTHER series!). I first heard of it a few years ago from friends and checked out clips on YouTube. Totally intrigued I bought the DVDs for series 1-3 (so far) and totally LOVED it. So naturally I now own the first 6 books in the 9 book series. The first book is told through the eyes of two of the main protagonists – James Holden who is/was XO of the Canterbury and Joe Miller a cop/investigator for Star Helix a private security firm. The first series of the TV adaptation follows more characters so it was a little disorienting at first to have such a restricted view in the books. But the first book does fill in some of the depth and background that we don’t get so much of in the first series. Weirdly though, because we are seeing through Holden’s and Miller’s ‘eyes’ the space battles that are fully displayed in the series are only either heard about later by the protagonists or only experienced obliquely. Again, having watched the first three series already, a little disorientating! Anyway…. Both Holden and Miller are investigating the same thing from different ends and slightly different perspectives so, when put together, gives an interesting view of what’s going on. I can’t really say too much without giving the plot totally way – plus it is passing complicated! Some critics have called it ‘Game of Thrones in Space’ and I can see why. There are three ‘factions’ – Earth, Mars and The Belt – all with their agendas, strengths and weaknesses. In the first book we mainly see things from the Belter’s point of view although in the first series on TV we also see a slice of the Martians (mostly from the MCRN battleship Donnager) and from Earth (mostly from characters which don’t appear in the books until later).

Seeing how differently ‘constructed’ the books are the series are (which kind of surprised me) I’d recommended reading or viewing the first three books/series and then swapping genres. I think the end of the first ‘trilogy’ is a good break point and doing this might reduce any confusion and ‘spoilers’ as events in the book happen out of sequence to the series. This is very accomplished read which I would have enjoyed just as much if I hadn’t already seen series 1-3. Part noir detective story, part political thriller, part GoT (I have to give it that) and part high space opera this was a delight to read and an even more delight to watch it come alive on screen. I am already looking forward to book 2 as soon as I can schedule it and series 4 as soon as it comes out on DVD. Most definitely recommended.

Oh, before I forget…. This version of the future is far more realistic than most others you’ll see on TV. Most of the tech you see is completely recognisable – from little drones zooming around to everyone checking their phones constantly. Space has been made both habitable and profitable by the invention of a very efficient engine called the Epstein Dive. It’s capable of both high acceleration (high enough to kill) and LONG burns. But there’s no inertial dampeners (so acceleration matters and too sudden deceleration will kill everyone on board), no shields, no phasers – space weapons are mostly missiles/torpedo and rail guns. Torpedoes can accelerate at 100+G so there’s no way in hell to outrun them. The only way not to get killed is Gatling gun type weapons called PDC’s (Point Defence Cannon). You run out of bullets – you die. End of…. Fun, eh?

Posted by CyberKitten at 4:50 pm

we began watching it but it was too violent for us... what can i say, we're old! we've been having a ball watching old Hopalong Cassidy movies...

@ Mudpuddle: Yup, it can definitely be violent at times - not just ships blowing up but reasonably nasty face to face stuff & of course some gun play. Oh, I remember Hopalong! My Dad (as always) introduced me to him (figuratively) growing up. He was fun.

They did a cracking job on both series and books so far. I especially liked how each was tuned to their respective medium. The series is tuned for the dramatisation requirements of the episodic format, the books are tuned to allow the story time to breathe.

Looking forwards to the last book coming ... some time.

@ Pete: Two very different media so not surprising that they're very different from each other. A straight adaptation from the book wouldn't have worked on screen but I think they did an amazing job of translation. LOVE that show and am looking forward to the next 8 books. Book 9 out in hardback in Oct 21.