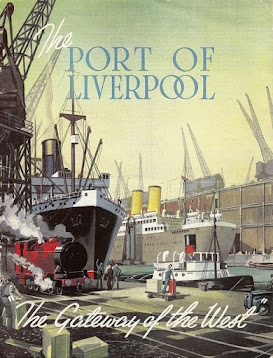 Posted by CyberKitten at 9:18 am

Email ThisBlogThis!Share to TwitterShare to FacebookShare to Pinterest
Labels: All @ Sea, On Track, Poster, Travel

South San Francisco kind of looks like that, over near the bay...

I spent a lot of time there - Liverpool rather than San Francisco - in my youth, wandering around the port/docks with my father. We saw, and went onboard, some amazing ships over the years... including (if memory serves) an aircraft carrier which was cool.

Actually after 2 minutes research I discovered what ship it was and when it was there: HMS Centaur on 13th August 1965 on her way to being decommissioned. For some reason I thought we'd been on one of the Ark Royal's. I guess ALL aircraft carriers seem like that to a 5 year old! [grin]

it's great you can still remember that!

As with most childhood memories I don't know if they're 'real' or confabulations. I seem to remember being on a ship with a huge (to a small child) expanse of flat deck and I also have a memory of going down on a huge lift inside the ship with lots of other people.... But that might have been layered on later after watching movies! [grin]