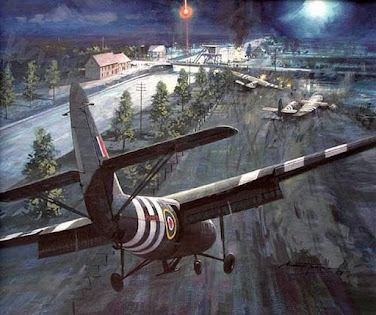 Posted by CyberKitten at 8:48 pm

Email ThisBlogThis!Share to TwitterShare to FacebookShare to Pinterest
Labels: Art, Up in the Air, WW2

On 6 June 1944, during the Second World War, the bridge was, along with the nearby Ranville Bridge over the Orne River (another road crossing, later renamed Horsa Bridge), the objective of members of D Company, 2nd (Airborne) Battalion, Oxfordshire and Buckinghamshire Light Infantry, a glider-borne force who were part of the 6th Airlanding Brigade of the 6th Airborne Division during Operation Tonga in the opening minutes of the Allied invasion of Normandy. Under the command of Major John Howard, D Company was to land close by the bridges in six Airspeed Horsa gliders and, in a coup-de-main operation, take both intact and hold them until relieved by the main British invasion forces. The successful capture of the bridges played an important role in limiting the effectiveness of a German counter-attack in the aftermath of the Normandy invasion.

Later in 1944, the Bénouville Bridge was renamed Pegasus Bridge in honour of the operation. The name is derived from the shoulder emblem worn by the British Parachute Regiment which depicts Bellerophon riding the flying horse Pegasus.

wow... somebody was thinking ahead!