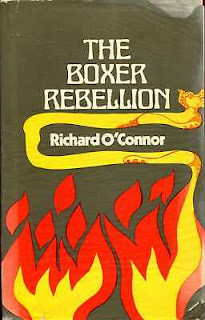 It’s sad to say but before reading this excellent history my knowledge (such as it was) of the Boxer Rebellion consisted mostly of snippets from other works and the 1963 movie 55 Days at Peking starring Charlton Heston, Ava Gardner and David Niven. Needless to say most of the movie was almost dead wrong historically.

The Boxer Rebellion was, it seemed, a long time coming. China had been attacked, occupied and essentially bullied into economic ‘co-operation’ since the early 1800’s and was getting more than a little sick of it. A big complaint was the activities of Christian missionaries who continued to convert thousands of Chinese subjects to their cause and belief. But really most of it was about power – and money. The Chinese authorities – especially the Empress – knew full well that they could not confront the European Powers directly so when the Boxer Uprising took place they saw their opportunity. The Boxers took great offense to foreign intervention in Chinese affairs and began attacking Europeans and those who worked for them with ever greater vigour. Naturally complaints were raised (and acknowledged) but secretly the authorities either turned a blind eye to Boxer activity or even actively encouraged it – handing over weapons and offering training where appropriate. The ‘foreign’ settlement in the capital Peking saw which way things were going and asked their respective governments for military guards – which duly arrived. These consisted mainly of marine units from the ships in harbour over a hundred miles away plus military band units so hardly the best of the best (back in those days – 1900 – the marines where not yet a countries elite fighting force).

It was not long before ‘blind eyes’ and tacit approval turned into full government support and a concerted attack on European settlements in several locations (not just in Peking) took place and involved Chinese imperial troops as well as Boxer irregulars. The Legation in Peking was very heavily outnumbered and was not expected to last very long. If it had been overrun and the diplomats killed the resultant revenge from all of the Powers would have been devastating to China despite the weak excuse of ‘The Boxers did it’. How the Empress thought she would get away with such a thing is beyond me. If things had gone ahead as planned and the Powers reacted as I fully expect they would it wouldn’t have surprised me if China as a sovereign nation had simply ceased to exist after being carved up and apportioned out to the countries involved. However, as actually hinted at in the ‘63 movie (so kudos there for that at least), the Chinese military commander refused to give over use of heavier artillery to the Boxers knowing full well that the Powers couldn’t withstand that and the number of casualties that would follow. What did surprise me (although maybe it shouldn’t have) was the fact that, unlike the movie portrayal, the Powers not only did not have any kind of unified command structure – so communications were often delayed – but that several countries contingents simply refused to co-operate with others which naturally meant extra work to ensure that certain Powers where not required (or asked to) assist certain others. For example the French refused to help the Germans (ditto) and the Russians and Japanese could barely stand each other. Interesting the film shows the US Marine commander (Heston) and the Japanese commander having good relations (I did wonder if this was in order to back up the anti-communist ‘pact between the two in the 1960’s). What the book relates is that the Japanese commander was not only the most experienced and most able of those available but (I think) also senior in rank so, technically at least, should have been in overall command of the defences. Unfortunately it was decided that it would be unthinkable for white men to be commanded by a Japanese officer – no matter how capable. Despite the brief reference to Ava Gardner playing at nursing (I think as I skipped through most of the ‘love interest’ bit between her and Heston) women played almost no part in the movie. In reality (again quite different) not only did they provide nursing services, cooking and cleaning (again just being the turn of the 20th century) but also produced most of the sandbags used in the barricades. One women (who I think was either French or American) joined the men on the barricades with rifle in hand. She was asked to leave as she provided too much of a distraction to the men. The other thing that the movie completely edits out – understandably as it adds a whole other level of possible confusion – was the fact that a lot of Chinese Christians helped with barricade construction, and much of the more mundane activities of any prolonged siege. The film also failed to show the blatant disregard for the Chinese suffering in a near-by compound despite the fact that the European Powers had offered them protection – at least initially.

The siege at Peking and elsewhere lasted almost 2 months largely due to the incompetence of and arguing between the respective Powers. An initial relief attempt had to be rescued and withdrawn because it was too small, put together too quickly and had grossly underestimated the resolve of Chinese units ranged against them. Only when a properly constituted force was ready – which took an inordinate amount of time – was progress made and the siege of the foreign legation lifted. Again in the movie this was shown as a just in time relief complete with marching bands. The reality was not so neat however. There the movie ended complete with cheering. What it didn’t show was what happened next. As Chinese forces left Peking the victorious (mostly European) armies did what they always do – looted the city, for about a month. Each Power looted in its own way and despite being ordered not to the American’s joined it. Some people made LOTS of money and museums and art galleries, to say nothing of heads of state, acquired choice Chinese artefacts which are still held today. As with previous conflicts the defeat of Chinese forces led to great penetration by the victorious Powers and even more trouble stored up for later.

This was a really fascinating book that had been sitting, unread and unloved, for far too long on one of my shelves. I wish I had read it sooner. I actually re-watched ’55 Days’ the day I finished this (YouTube for the win!) to see just how different the movie version was to the actual reality. I shouldn’t have been shocked but I was. This was an extremely informative and interesting look at a piece of Imperial history and an important part of the history of Western-Chinese relations that still echoes today. Definitely worth reading if you can find a copy. Highly recommended.

Posted by CyberKitten at 4:08 pm

great-and surprising - review... i've read material in the past re the Boxers but it's mostly gone where old memories go; nice to hear real facts resonate in the old brain pan...

@ Mudpuddle: Surprising? How? The major Powers really screwed with China over the years up to, and including, WW2. It's not all that surprising that there's not a lot of trust regarding Western intentions....