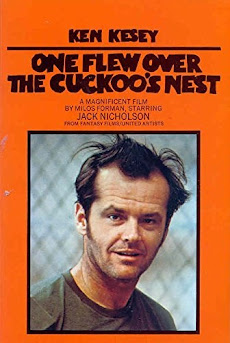 Everything was perfectly orderly, just the way she liked it. Sure, it had taken her months to get it this way what with weeding out the weak nursing staff and dropping hints about the unsuitable doctors that were her supposed superiors but it was worth the effort. From her station she could see everything. All was quiet, all was ordered, and all was under control. Then HE arrived. Transferred from an open prison Randle Patrick McMurphy was a born troublemaker. He was brash, noisy, argumentative and uncontrolled. Well, she’d see about that! Being head nurse gave her a certain amount of leeway in drug allocation and the use of restraints. It would take time before McMurphy was under control again but she’d seen his kind before and knew how to handle them. The brashness was, she knew, simply a front. Well, she’d cut through that and then cut him down to size before he disturbed the equilibrium too much. The other patients really didn’t know what to make of him but she did. She would make an example of him to the others – to show that the System can break anyone – or her name wasn’t Mildred Ratchet. Unfortunately, for all of her plans, McMurphy had other ideas and LOTS of them.

I remember seeing the 1975 movie version of this book (which won 5 Academy Awards) and being blown away by Jack Nicolson’s iconic performance as McMurphy. Naturally I ‘saw’ him every time he appeared on the page. Likewise with nurse Ratchet played by the very intimidating Louise Fletcher. The tale is, on the face of it, fairly mundane. The main focus is a ward of a mental hospital which seems placid on the surface. Enter McMurphy who is essentially a large rock dropped into this pool and who’s anarchic antics start to wake everyone up to the fact that their lives inside the institution are being controlled to their detriment. The story worked, I think, on two general levels. Firstly as a scathing critique of mental health provision in the US – underfunded, overlooked and too often simply barbaric [convulsive shock ‘therapy’ and lobotomies to ‘calm’ people figure prominently here]. Second as a critique of the larger society, not simply for allowing such things to continue in an apparently enlightened age, but for its use of control mechanisms that instil ‘order’ at the expense of the Individual. McMurphy is, naturally, a symbol of everything that orderly society fears and abhors – he’s fun, anarchic, and loud. He gambles, drinks, takes drugs and stands accused of sex with a minor. He knows prostitutes and is able to bend (and all too often break) standards and conventions that others hold dear. In other words he’s dangerous and needs to be controlled or eliminated to ‘encourage the others’.

McMurphy is juxtaposed with both the crushing authoritarianism of nurse Ratchet and all she represents (the dreaded ‘Combine’) and also with the largely conforming patient community in the hospital. He is a lightning rod to show the contrast between freedom and order, between control and the individual. It’s a powerful statement and must have been even more so in the very early 60’s with its adult readership in particular still embedded in the more controlling and conformist 1950’s mindset. Not too surprisingly the novel has been banned at various times across the States from the 1970’s and remains one of America’s most banned books. I found it a little difficult to get into at first but ended up really liking it. Definitely deserving of its modern classic status and a definite recommended read.
Posted by CyberKitten at 2:57 pm

This is, curiously, one of those classic movies which I've never watched or read. I've never even know anything about the premise, beyond "Jack Nicholson plays a crazy person". Odd oversight, I guess -- seems promising!

the book was a big deal when i was young, and contributed in a fundamental way to the Hippie revolution, as did the author... it certainly played its part in disrupting my otherwise ordered existence as a beginning adult...

@ Stephen: I think you'd like it. The McMurphy character is rather over the top and a bit of a jackass but entertainingly points out the problems with an authoritarian system on any scale.