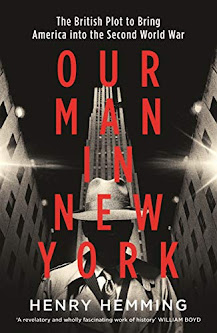 It had often been a story told around the family dinner table – how his father had almost drowned age 3 just days before the outbreak of World War Two. Luckily, for both his father and the author, a family friend had been on hand to fish the wandering boy out of the pond and save his life. But who exactly was this family friend?

His name was Willian Stephenson (which turned out not to be the name he was born with) who, in 1939, was a successful businessman with contacts and contracts all across Europe. With war on the horizon Stephenson offered his services and those of his organisation to British Intelligence who turned him down. Impressed with his obvious abilities that had another idea. They wanted him to sail to New York and run the MI6 office there. His remit was an apparently simple one – to report back on American willingness to help Britain’s war effort and to ‘do what he could’ to encourage the US to enter the war on Britain’s side. It was going to be a tough hill to climb. In May 1940 only 7% of Americans thought that declaring war on Germany was a good idea. America had a large German population who either desired neutrality or active support of their homeland. Meanwhile German propaganda had been operating for some time inside the US to ensure that they didn’t join forces with Britain against the Axis Powers. If that wasn’t enough there was a well-funded (again in part but by no means exclusively by the Nazi government) Isolationist movement that had many supporters and celebrity endorsement by the likes of all-American hero Charles Lindbergh. With a limited budget and only a handful of staff in New York Stephenson did the only thing he could – he spent his own money on moving the MI6 operation to better and bigger premises and started a recruitment campaign. His objectives were clear: He needed to accurately gauge US public opinion on the war, he needed to counteract German propaganda, he needed friends in high places, he needed to discredit Lindbergh and he needed to manipulate American media outlets to turn public opinion in the way his boss back in London most desired. Over the next year, despite the forces ranged against him Stephenson waged a campaign the likes of which had not been seen (or honestly conceived of) until then. By October 1941 76% of Americans approved of their President’s foreign policy and stance towards Germany. By November 1941 an impressive 85% of Americans fully expected to be at war with Germany imminently. Mission accomplished.

I do love reading around subjects rather than running straight at them. In Britain’s darkest hour after the Fall of France and before the US entered on the Allied side the willingness of America to become the Arsenal of Democracy was vital to England’s survival. I knew that Roosevelt wanted to help as much as he could but his hands were tied by Congress and previous agreements limiting Presidential action and involvement in foreign wars. Roosevelt pushed as close to this limits as he could publically and pushed beyond them in secret. If he had been discovered there was a real possibility he could have been impeached. What I didn’t realise, until reading this GRIPPING narrative, was just how much we manipulated US public opinion in order to support the President’s endeavours on Britain’s behalf so that it wouldn’t look like he was too far ahead of the public mood – he wanted to be seen, at least in theory, as following opinion rather than leading it. It was, to say the least, a risky strategy that could have easily backfired and turned public and political opinion against Britain just when she needed it most. I’m sure, like me, not many people know much if anything at all about this aspect of WW2. It was to say the least an eye-opening and fascinating insight into a side of the war that had previously failed to cross my mind. HIGHLY recommended for anyone interested into why America entered the war when and how it did.
[Side Note: This is only the 6th book reviewed with a publication date of 2019. So far, despite being half way through 2021, I have yet to read/review anything published on 2020 or '21. I wonder how long it'll be until I do so?]
Posted by CyberKitten at 3:47 pm

i admire people like Stephenson who actually do stuff w/o anything going wrong...

He was VERY accomplished - especially as he did most of the operation with very little training or direction for his superiors. He just did what he thought was right and most effective.