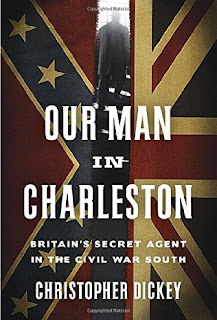 Even on the journey to Charleston British consul Robert Bunch had yet to decide if his posting was an opportunity or a poison chalice. On the face of it his task was a simple one – although singularly beyond his predecessor’s capabilities – to change a South Carolinian law that was inconveniencing the British crown. The law, brought in to effect after a slave uprising some time before, mandated that all non-white sailors aboard ships entering Charleston harbour would be held in jail – at the ship owners expense – for the duration of the ships visit. The reason was a simple one, at least to the great and the good of that slave owning state – seeing and (heaven forbid) communicating with free men of colour would only lay the seeds of rebellion in the minds of ignorant black folk so everything possible needed to be done to prevent this. The British consul’s first task was to get this law modified (if not overturned) to prevent British citizens from being abused (or worse) in Charleston’s jail system just for having the misfortune of being on a ship that called into that port and for being black. Unsurprisingly Bunch had his work cut out for him but he didn’t stop there. In the years that followed consul Bunch, often way beyond his remit (and sometimes either simply ignored or reprimanded) produced report after report and letter after letter both to his superior in New York as well as to his Foreign Office superiors in London outlining conditions in Charleston and in the South generally and, as Secession and even war approached alerted London as to the mood of the Southern states (and later the Confederacy) as well as their expectations of British intent. Bunch provided, often at great personal and professional risk, vital intelligence about the burgeoning insurrection and detailed assessments that often proved to be both detailed and prescient.

This was quite an eye-opening book on multiple levels. I had no idea that British consuls were even active in the Southern US never mind that at least some of them played such vital roles in informing the British response to the emerging Civil War. I was also rather surprised at the level of opposition to Slavery by the British government. I know slavery was abolished (in the most part) in 1833 across the Empire – with some parts only being added later – but was unaware at just how much effort Britain expended to stop the TRADE in slaves rather than slavery per se. Not only did the British essentially bully other countries (notably Spain) to enact similar legislation in its colonies (Cuba especially) but also stationed elements of the Royal navy off the coast of Africa to interdict any ship suspected of transporting slaves across the Atlantic. This cost the British economy around 2% of GDP, around 5,000 lives lost and existed for SIXTY years. I had zero idea that this was a thing! Inevitably there will be books on the way about this very subject so stay tuned. Taking this into account you can imagine consul Bunch’s views on the Southern idea that Britain would inevitably first recognise the Confederacy post-secession and would probably fight on their side against the North because of – cotton. This was, of course, a complete fantasy. As the future rebellion built intelligence from Bunch and others had already resulted in increased investment in cotton production in both Egypt and India. Even after the war started and cotton exports dropped to almost nothing (which caused great hardship in the mill towns of Northern England) there was never any possibility that Britain would back the South. The whole idea was inconceivable. What was much more likely was a British war AGAINST the South if the Confederacy had gone ahead with the idea of re-opening the Atlantic slave trade to ease its economic woes. If Confederate slavers had tangled with British naval vessels war between those two entities would have most likely followed.

For a whole host of reasons this was one of my top reads of the year so far. Not only did I learn a LOT about the move towards Civil War in the US (admittedly from a fairly low level to begin with) but I also renewed my fascination with 19th century British politics and especially the career of Lord Palmerston (known as “pumice stone” for his legendary abrasiveness!) who during that period was sometimes Foreign Secretary and Prime Minister. I think I added at least 3-4 books to my Amazon Wish List because of this book and it has provided me with several avenues of new research to follow – so great stuff. As always much more to follow. Highly recommended.

Posted by CyberKitten at 4:15 pm

i recall reading several (at minimum) accounts of fighting the slave trade on the coast of Africa in various sea-faring series, altho not in Hornblower i don't think...

oh, fiction... oh i see what you mean? even if it's fiction, it means someone was thinking about it doesn't it? maybe not. humph... well i retract the comment, lo siento..

I've never heard of the South re-opening the slave trade. It sounds problematic -- the landed elite favored the suspension of importation because it raised the value of existing 'stock' and gave them an effective monopoly on future slave-selling. Sounds like an interesting story all round, though.

@ Mudpuddle: I'll look out for it. I've added a few books on Britain's fight against the Slave Trade to my Wish List.. So watch this space.

@ Stephen: Apparently there was much (heated) debate about the idea of re-opening the Atlantic Passage. Some states - the slave producing ones where, as you suggested, dead set against it as it would reduce prices/profits. Other states in the Confederacy essentially thumbed their noses and said they'd do it independently. Apparently there was no process in place to stop them. Of course if it had gone ahead it might have resulted in war with Britain AND the North/USA. Not the best outcome I feel!! I think you'd find this an interesting read.

Hmm....if Britain and the Yanks had both declared war on the South, it might have folded far more quickly and avoided as much death and material damage. I just can't see that possibility, though. Britain was still invested in Canada at that point, and having their aggressive rebel children fighting among themselves was a nice situation. Better that than invading Canada a...3rd? time. ;-)

@ Stephen: Oddly the North/USA threatened Britain with war if they recognised the CSA. All very messy and, therefore, quite fascinating. Then again the PM/Foreign Secretary (Palmerston) did invent the idea of 'gunboat diplomacy' so anything could've happened really. I do need to deepen my knowledge of your Civil War though....

Like you, I had no idea this ever happened. I am putting this one on my 'for later' list. Great review.

@ Sarah: Not sure if you'd 'like' this or it would just annoy and upset you. Worth reading though - especially as it gives an outsiders view (filtered through an American author) of the run-up to the Civil War in the South.

Ah, good call. You know me so well!