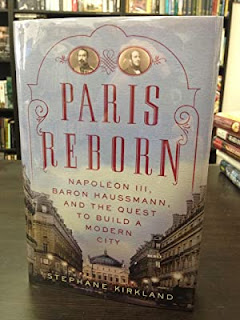 If there is one thing that History teaches – apart from the fact that we humans do not learn from History – is that things are invariably contingent. There is no Fate, no Destiny and no Plan. Bullets miss their intended target, winds change direction at just the wrong time (or just the right one), and messages are delayed, lost, misread or ignored in the heat of battle. Such things are woven into the fabric of human history and are one of the things that make predicting things such a headache. Looking back, and having a grasp of the minutiae of unfolding events, we can see that things often viewed in hindsight as inevitable are anything but – things could always have been different. This applies to individual lives, countries, battles and cities.

Paris, now rightly regarded as a world city, a city of light and one of the urban wonders of the world, was anything but in the early 19th century. Growing organically without much in the way of planning or foresight it was starting to fall victim to its own success. Small changes had been made over time to alleviate problems here and there and opportunities to upgrade or demolish buildings had been taken in the event of fires or other disasters but it was time for something more radical. But first a vision was required and someone powerful enough to drive that vision forward. Step forward the unlikely possessor of that vision - Charles Louis Napoléon Bonaparte, nephew of the more famous Napoléon Bonaparte we all learnt about in history class. Vision he had, but power and influence he most certainly lacked. Luckily for him (and arguably the world) he was about to be ‘used’ by a political fixer by being installed as President of France in 1848 and, after his short and undistinguished term in office, then being replaced by said ‘fixer’. Unfortunately Charles Louis had other ideas and executed a palace coup becoming Napoleon III – Emperor of the French – in 1852. Power, influence were now his along with the vision of creating a city fit for an Empire. Appointing Georges-Eugène Haussmann (later Baron Haussmann) as Prefect of the Seine to co-ordinate the project the wholesale overhaul of the city could begin.

This excellent book – a MUST read for anyone interested in either urban development or simply Paris herself – tells of the building of elegant boulevards, opera houses, government buildings, parks and gardens which transformed a mixed modernising and still medieval city into the edifice we see today. The very distinctive, iconic, architecture we see today is the product (unfortunately uncompleted) of the vision and drive of these two men along with some of the greatest urban designers and architects of the age. Paris would have looked a LOT different today without them. Many European cities had the (rather questionable) ‘advantage’ of recovering from bomb damage after WW2 which allowed them to redesign themselves into the modern age. Paris chose a different route in the mid to late 19th century – a truly massive (and hugely expensive) programme of destruction and reconstruction on a scale that amazed and shocked many residents and visitors and, not incidentally, created many enemies for both the Emperor and his frontman Haussmann. Unfortunately for posterity the project died along with Napoleon III’s hopes in the aftermath of the Franco-Prussian war which he handled so badly. But much had already been achieved and much remains for us to admire and wonder about. This is a delightful exploration of the rebuilding of an imperial capital which became the envy of Europe by the end of the 19th century. Definitely recommended for all ‘urbanophiles’ and for anyone who ever wondered why Paris looks the way it does.
Posted by CyberKitten at 4:34 pm

i recall reading an account of how Hausmann "destroyed" the colorful old city... all pov, i guess... the universe is only a 3-d billiard table, anyway...

Was Hausmann the Robert Moses of his day?

@ Mudpuddle: The project certainly destroyed several low-rent areas that had been considered 'colourful'. No one really cared (apart from the residents) when they were 'bulldozed' though. It was only when the works moved into the higher class areas that the project got serious push-back.

@ James: It seems that way. Haussmann had multiple 'hats' too and wasn't a trained architect or engineer but used both to get his overall plan completed. It looks like both were equally controversial too! I'll be reading about New York/Robert Moses in future....