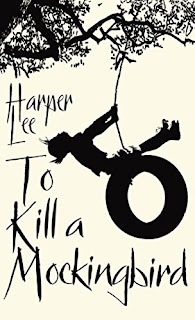 Scout could see that Atticus, her father, was distracted by something. What that something was she had no idea. Anyway, she had enough to think about – school for one thing as if she needed that! She could already read and understand some of the things in her father’s paper and could ask questions if she didn’t. What did she need to go to school to learn about things that had no interest for her? Her elder brother Jem said that things would get better in a few years but at 6 years old ‘a few years’ seemed a lifetime away. But something was definitely ‘off’. In the meantime there was a town mystery to solve – or at least to poke at a bit with a stick. ‘Boo’ Radley’s place had been locked up all her life but the rumours of what went on and had gone on in there buzzed around like fireflies and enticed the children, now with Dill in attendance, to see what they can find out – despite the danger and the chance that Atticus might find out and stop them. But Atticus was away at the State capitol more and more these days and, despite her reputation, the family cook’s eyes couldn’t be everywhere. It was only when Scout got into fights with her classmates that Atticus had to explain why some people were calling him names. A black man called Tom Robinson had been accused of a terrible crime and Atticus had been given the job of defending him. Some people in their town thought that such a defence put him beyond the pale. Atticus simply disagreed with their assessment. As the trial approached and tensions in the town started to rise the children realised that something big was happening in their very midst, something important, something they would remember long afterwards and something they were determined not to miss on any account. 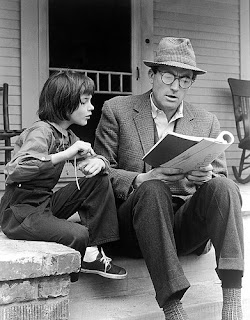 I have vague memories of seeing the 1962 movie starring Gregory Peck as Atticus Finch and Mary Badham as ‘Scout’ (Jean Louise Finch) – pictured above. So I was aware of the rough plot going in. What I wasn’t expecting, not knowing much else about the book, was that the PoV of the novel was Scout’s. Not only did this work really well – I thought that she had a wonderful ‘voice’ even if it was clearly beyond her fictional years. Seeing everything from a child’s perspective not only gave things an almost ‘magical realism’ quality but allowed the reader to follow her around town asking questions that either the adults would never have asked (or thought) and – by and large – answered in a straight-forward manner. This meant that the reader’s ignorance was removed slowly as the story progressed. Using a child to lead the way through the thicket of politics and prejudice in 1930’s Alabama was a stroke of genius that made the novel a timeless classic and, in my opinion, well deserving of the Pulitzer Prize. Despite being a time and place well outside my experience I had little trouble navigating around the fictional town of Maycomb and engaging with its residents – both good and bad, pleasant and unpleasant. I found myself completely captivated with the town’s goings-on and the complex social web of families, ancestry, class and race. I was honesty surprised at both how good this novel was and how much delight I had reading it. Definitely worthy of its classic status and, if like me you’re one of the few people who haven’t read it, I heartily recommend you do so. As you might imagine given the plot, the era and the location, there are more than a few ‘N’ words dropped throughout the text. This is forgivable considering these factors but just so you know. [Sidebar: One such use really jumped out at me when Scout dropped the ‘N’ bomb in conversation with Atticus. He told her off and said that she shouldn’t use that word – not because it was wrong or deprecating but because it was ‘common’. I found that quite interesting…..] So that’s me equalling (I think) the number of classics read from last year. One more in the review pile and, hopefully, a few more after that.
Awards
Pulitzer Prize for Fiction - Best Book
Brotherhood Award of the National Conference of Christians and Jews
Paperback of the Year award from Bestsellers magazine in 1962
Posted by CyberKitten at 4:09 pm

nice review... i haven't read it either: someday, over the rainbow...

Atticus is right. Blacks shouldn't use it, either. I don't respect anyone who uses it, -er or -a. The novel was superb drama as I remember, and of course I've gotten to visit the very courthouse they filmed the movie in...:)

@ Mudpuddle: Oh? I thought that this would be a set text in school?

@ Stephen: I was definitely impressed by the writing. More classics (from around the world) to come. Hopefully I can read at least 6 this year to make up for the relatively poor showing (only 3) last year.