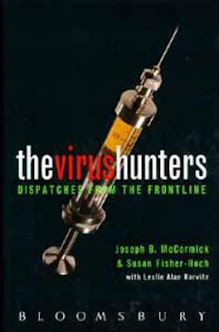 It was almost like being a GP – late night urgent requests and neighbourhood house calls, except that the requests came from the CDC or WHO and the house calls could be anywhere in the world. But when the medical emergencies could result in thousands of deaths (or more!) a little inconvenience and some hard travel were all part of the deal. Of course there was never anything little about the job these intrepid men and women undertook.

Looking back into efforts to address outbreaks of multiple potential epidemics in Africa in the 1980’s onwards (from the point of view of the mid-1990’s) the authors alternately tell their tales of travel to places few had heard of – including the authors themselves more often than not – to investigate unexplained illness and, too often, unexplained death. Often the local medics, who again too often at the time where both poorly trained and poorly equipped, were at a loss to explain the origin and spread of a pathogen and had called on local authorities to help when the outbreak had either become too large to ignore or too inconvenient to cover up. Struggling governments don’t like appearing weak – either to the world community, their own population or to their enemies both foreign and domestic – so (again) too often they called for help when all else had failed. With limited resources and staff with the necessary knowledge and experience it was normal for CDC to send a single operative (or rarely two) to investigate and report back. Whilst major cities in the region were usually adequately supplied with electricity and roads the sites of the outbreak were anything but. Few had nearby airfields (even for small craft when they were available) and fewer pilots – even from the country’s military - were willing to fly into ‘hot zones’ fearing contamination themselves. This often meant hours long, back breaking, travel in unsuitable vehicles to villages with only intermittent electricity and few, if any, medical supplies. The CDC medics took what they could carry and used what they found when they arrived.

When facilities allowed the initial diagnosis took place in the field. As technology and knowledge improved throughout the 80’s this became easier but sending samples of unknown pathogens to labs in Europe or back to the States was not unprecedented adding delays and the inherent danger that either the samples were lost, destroyed or had decayed during the trip. Being at ground zero in these circumstances was very frustrating and downright dangerous. A slip with a needle or scalpel, a possible infection with Ebola (which actually happened to one of the authors!) could mean hours or days travelling just to get tested. The stress must have been crushing at times.

Told with real drama these stories of quiet heroism highlighted the activities of the CDC, WHO and others (in this case in Africa) on the frontline of disease control and epidemic/pandemic early warning. Dealing with some of the most dangerous diseases known to man (so far!) these men and women are doing a vital job to protect humanity from our oldest enemy. Although somewhat dated by now this is still an interesting read to understand what was going on at the end of last century in the world of epidemiology and can be used as a deep background study and an aid to understand what has been going on (and sometimes not going on!) during the latest pandemic. Recommended but more up to date books to come.

Posted by CyberKitten at 4:22 pm