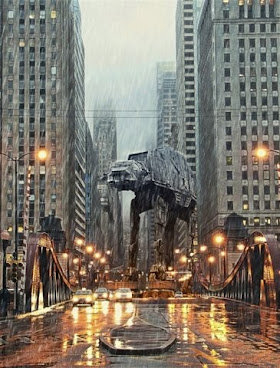 ..and that's it for Star Wars Week. I hope you enjoyed this brief diversion but now back to 'normal' programming... [grin]
Posted by CyberKitten at 11:07 pm

@ James: I really enjoyed the 1953 version MUCH more than the 2005 one. I wish someone would do a faithful adaptation of the original novel complete with Thunderchild. That was one of my favourite bits from the novel.

The artwork shows that the AT-AT (as with most large military vehicles) really struggles with an urban environment. FIBUA *really* soaks up troops which is why militaries all over the world *hate* fighting in cities.