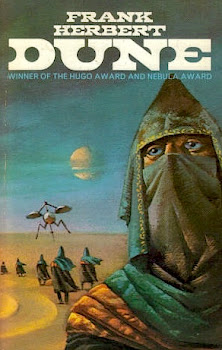 It was an act of betrayal and an act of love that started it. Lady Jessica, sworn concubine of Duke Leto Atreides, had been ordered by the Bene Gesserit sisterhood to only birth daughters. But in an act of staggering disobedience and presumption she gave birth to a son – Paul. By this act Jessica put at risk generations of selective breeding but something could still be saved. If, that is, he survived. A great change was coming. House Atreides was to replace House Harkonnen as the steward of planet Arrakis, the only planet in the known universe to produce the spice Melange. This substance is the pivotal element in universal commerce and is almost beyond price. Without it the human star spanning empire cannot exist. Arrakis is a great prize but also a great trap. Leto is aware that the Harkonnans and the Emperor are planning to move against him but events quickly spiral out of control. In the most hostile environment in the universe the young Paul must hide, survive and seek out the local desert people – the Freemen – if he has any chance at all of striking back against his families enemies. If that wasn’t enough for someone who had yet to attain manhood, something is growing inside Paul that he can barely comprehend and cannot easily control. It started with dreams of the future and a girl in the desert. Where his dreams will lead him will affect billions and, if he can master them, bring an empire to its knees.

I first read this classic of Science Fiction a little over 40 years ago in my late teens. To say that it had a lasting effect on me would be to downplay its impact. Even then, after already reading SF for 4-5 years I had never read anything like it. Both the scope and the depth of the narrative where, to be honest, intoxicating. It was, in a most literal sense, mind expanding. I did wonder, with the passage of 4 decades and the repeated viewing of the deeply flawed 1984 David Lynch adaptation (plus the more recent viewing of the SF Channel adaptations of Dune & Children of Dune) whether it would have anything like the same impact today. It didn’t – as I couldn’t really expect. What I was impressed by, still, was the depth of the story mostly rendered in things unsaid or mentioned almost in passing. It was clear throughout the book – much longer than most SF novels of that time – that the story, large as it was, was only a small part of the overall universe in which it was set. Not only is the tale set thousands of years hence in man’s future but the canvas upon which the story is drawn covers countless worlds and peoples some of which we only hear of as a planet’s name or a reference to a family name – nothing more. But the background is *there* in the shadows waiting to be revealed. Most of the epic is, at least in the first book of the first trilogy, left unsaid and undiscovered. Naturally, as a teenager, I wanted to know more, much more….

There is probably little to be said about Dune that hasn’t already been said a hundred times. It IS a classic of SF and fully deserves to be so. It influenced a great deal of galaxy spanning SF from its initial publication date and probably single-handedly elevated the entire genre into something at least potentially worth reading by anyone (and everyone). One of the funny things though, at least for me, was that I never identified with the teenage hero as I was ‘supposed’ to. The hero for me (and I was to later find out for others too) was the sword master Duncan Idaho. Funnily Duncan isn’t in this novel very much – in fact he hardly gets a bare mention – but I think becomes a central character in the latter two books. Yet it is him, rather than Paul that I remember most. Weird.

One more thing before I finish. I haven’t seen the new movie (yet) but I have high hopes for it after seeing the trailers which most definitely look the part and indicate that the new director has taken the original text to heart. But one of the criticisms I’ve heard more than once is that Paul Atreides is yet another example of the ‘white saviour’ in fiction who swoops in and ‘saves’ indigenous people from disaster. This is wrong, so wrong, from a number of perspectives and shows that the critics involved simply haven’t read the books or have a basic understanding of the plot. For one thing the director himself has said this is not the case and he should know. Plus there’s the actual story.

[WARNING – The following may contain spoilers if you haven’t read the book(s) and are planning to see the movie!!]

What Paul and Jessica are forced to escape into the deep desert it is the Freemen who rescue THEM rather than the other way around. If it wasn’t for Stilgar and his tribe its probable that both Paul and Jessica would have died out there. The reason Jessica is adopted into the tribe is two-fold. Firstly for her fighting skill that makes her worth ‘ten times her weight in water’ (and also puts paid to any accusation of the plot being sexist BTW) and second because she is a Bene Gesserit and they have seeded the planet with legends that Jessica can use to manipulate the Freemen into believing her and her son are part of an ancient (false!) prophecy. Paul earns HIS place both via his mother and by the fact that he kills another Freeman in open combat. Later Paul provides technical and strategic skills the Freeman didn’t have but at no point – not even at the end – does either Paul or Jessica ‘save’ the Freeman. Before Paul’s arrival the Freeman had been living under the Harkonnan heel for decades and had been more than holding their own against their depredations. Even with the advent of Imperial forces later in the novel pre-Paul/Jessica trained Freeman managed to kill them with relative abandon. Paul and his mother USED the Freeman and their legends to save themselves and did not ‘save’ the Freeman. Looking into the future Paul’s actions actually result in countless Freemen deaths because of his refusal (cowardice?) to follow the ‘Golden Path’ that his prescience provides him with. So ‘Saviour’? Absolutely not. If that wasn’t enough the author was asked for the main theme of the book. He said ‘Don’t follow leaders blindly – especially charismatic ones’. So, no ‘saviour’ there then!
Awards:
Hugo - Best Novel
Nebula Awards - Best Novel
Posted by CyberKitten at 4:01 pm

read this when it first came out and liked it, but not as much as you did... movies are never as good as the book: the pictures aren't as good as the mental images...

@ Mudpuddle: SFX certainly cost a LOT less in books than in movies - plus if your imagination is good enough and the writing is descriptive enough you can do just about anything. It's rare indeed that movies are better than books but not impossible. Some books are VERY difficult to film - Dune, I think, being one of them because of its scope, depth and (honestly) lack of much 'action' which audiences seem to demand these days.

I've heard so much about DUne over the years! Thanks for the spoiler-free review. This is one I'm hoping to tackle soonish..

@ Stephen: Glad it's spoiler-lite. I do *try* not to give too much away in my reviews (I hate that!). I'll be re-reading the next two in the first trilogy @ some point & then moving onto the 2nd trilogy which I haven't read before. After all THAT I'll start into the post-author death books co-authored by his son. I'm just hoping that they aren't as cash-cow milking as they sound right now!! [grin]

I look forward to your review when you post it.