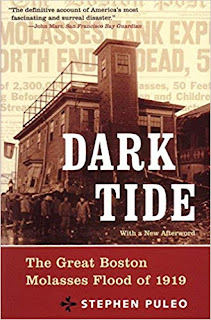 Boston Harbour, Around Noon, January 15, 1919. It started with a bang like thunder followed by what sounded like a carriage or an automobile crashing into a long fence. For the briefest of moments there was silence and then screaming. One word rang out above all others – RUN! Brief seconds before the 50 feet tall steel tank located conveniently on the harbour-side had ruptured spilling around 2.3 million gallons of molasses onto an unsuspecting populace. The 15 foot high wave moved at 35 miles an hour – far faster than anyone caught in its path could move. Minutes later around 50 people were dead, some drowning in basements, and hundreds more lay injured or maimed. Wooden buildings had been swept away and even the Boston overheard railway had buckled under the onslaught. But what had caused the tragedy? With the clean-up operation still in progress the highly respected ‘soldier-lawyer’ Hugh W Ogden was asked to get to the bottom of things, decide who was responsible for the tragic events of the January afternoon and assign compensation accordingly. Confident that he could do so in good time he told the partners of his law firm that he expected to be back in his office in six weeks. The full investigation and presentation of testimony would last much, much longer than that.

The company that owned the giant tank and had it specially built to house the molasses knew that they were on to a good thing. With the war in Europe getting ever more deadly and with the USA about to join in the need for explosives was never higher. With molasses as a major ingredient for industrial alcohol and with that as a major ingredient of a whole host of explosive substances the profits were immense – and could be maximised if the giant tank at Boston was erected on time and if it was kept as full as possible as often as possible. The onsite manager knew what was best for him and his career and pledged to ensure that both happened with expeditious speed. Unfortunately for near-by residents, mostly Italian immigrants housed in poorly maintained blocks adjacent to the harbour, the manager had little knowledge or experience of construction or the safety margins involved. Seen leaking from the moment it was constructed and a source of ‘sweetener’ for local children the only response from local management was the occasional ‘caulking’ of the seams and finally a re-paint to hide the stains of molasses dripping continually down the sides. Naturally when the tragedy unfolded the company in question denied any wrong doing or any negligence. In their ‘defence’ they proposed that the tank had been destroyed by Anarchist terrorists without a single piece of evidence to support it – apart from one rather questionable ‘eye witness’ who apparently saw ‘smoke’ rising from the tank just prior to the disaster. Other witnesses and expert testimony told quite a different story.

Apart from the leaking, visible to everyone and regularly reported, the giant tank itself had never been stress tested at anything like full capacity – even with water. The plans for the tank had never been approved or even inspected by any independently qualified engineers and the sheeting delivered from the steel company had never been checked to see if they met the specifications given to them and which had been requested by someone with no knowledge or expertise in the design or building of such tanks – and someone who had never even sought advice on the project. It was in every respect a complete shambles.

I’d never heard of this truly bizarre incident until this book popped up on my Amazon recommendations some time ago. With such a strange story I just had to buy it. I was most definitely NOT disappointed. The reporting of the incident itself, the very interesting political background behind a whole spate of bombing throughout the US at that time and the look at the investigation was riveting. Told with knowledge and gusto this was a fascinating and often heartrending tale from beginning to end which did full justice to those who were injured and killed due to this avoidable disaster. If you’re looking for something more than a little odd or just for a gripping tragic story this is definitely the book for you. Highly recommended.

Posted by CyberKitten at 4:18 pm

I have had this one on my TBR for almost five years now. The first time I learned of it I thought surely, no, molasses? But then I read up on the incident and it is horrifying. Great review, and lucky for you this one is already on my list!

@ Mudpuddle: The fallout of the legal case changed the local rules and updates in regulations then fanned across the US.