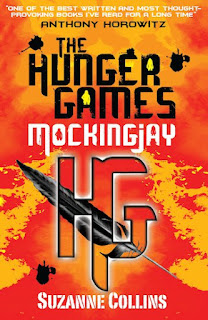 It was what she was made for, but that didn’t mean she had to like it. Being a symbol of the growing resistance to the Capital was bad enough but now they were insisting that she become THE symbol of resistance – The Mockingjay. Pressure, always pressure and then before she could get used to the idea some more pressure just in case it wasn’t already too much. She wanted to help of course. She couldn’t think of anyone else who hated the Capital more or wanted to see President Snow dead more than her but…. Was she up to it? That was the question that kept her awake at nights – that and the nightmares from the previous Hunger Games she had barely survived. She had her PR Team to make her look good on the propaganda videos but still she had to perform, she had to look as if she knew what she was doing, she had to inspire others. But to tell the truth she could barely inspire herself. Everything changed when Peter, dear lost Peter, warned of the incoming attack on District 13. If a near-death experience and the chance to save the boy you loved wasn’t enough to get her ass moving she really didn’t know what was. It was time to end this. Time to smash the Capital once and for all time. But then what? What would they put in its place and who would be its new face? Katniss had no idea. The only thing she knew for sure was that she wanted no part in any future where people, children, fought each other for entertainment. If she could just stop that it would all be worth it. Time to go to work….

I read the original Hunger Games in 2013 and Catching Fire two years later in 2015. Fast forward another SIX years and I finally finish another trilogy. At this rate I doubt if I’ll ever finish my next challenge – the Maze Runner series….. [lol] But anyway, at least it’s done now. Despite not enjoying the movie versions (OK, except the risible 3rd movie in the Divergent series) as much as its competitor I do think that, overall at least, I enjoyed the books much more. The end of the Hunger Games trilogy was vastly superior to the train wreck that was ‘Allegiant’. Not only did it have a (mostly) coherent plot and quite a bit a character development – both for Katniss and some of the other major players (those who loved anyway!) – but the ending made sense and gave the readers a sense of closure and final relief for the girl simply no longer wanted to be on fire. Satisfying I think is the word rather than anything else. I don’t think that any of the books knocked it out of the park for me. They were, as this is, competent, solid, entertaining reads. The translation from page to screen was very accomplished with the screen version being rather toned down from the dark and surprisingly bloody books. There’s definitely a lot more death, blood and tears between these pages than ever made it to the silver screen – so be warned! If you were expecting action and fighting without blood and, all too often, guts too then you might be shocked at the graphic nature of the narrative. There’s plenty of soul searching too that didn’t make it to the movies (it would’ve slowed the narrative too much) so be ready for some pretty HEAVY thoughts here. Overall surprisingly good and overall better than the movies.
Posted by CyberKitten at 4:53 pm

I very much appreciated Collins' exploration of how easy it is for the 'good' guys to go wrong in this novel. As I recall, the rebel government was just as manipulate of Katniss as Snow?

@ Stephen: Pretty much. Katniss was being manipulated by the leader of the rebels & was on their hit-list if Katniss became too popular with the 'troops' and became a threat. All very dark, grubby and therefore realistic.