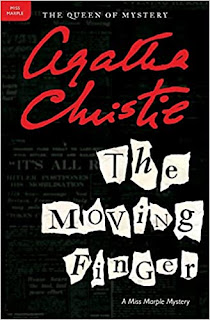 It was doctors’ orders, so of course he said yes. The prescription was rest, no stress, and quiet. What could better sum up all of that list than a country cottage on the edge of the sleepy town of Lymstock. But after his accident Jerry Burton couldn’t possibly look after himself – not with the amount of plaster he was carrying around. Luckily his sister Joanna was available to play nurse and to suffer the delights of country life far away from her too complicated love affairs in London. But almost before they had settled into their new domicile they received an anonymous poison pen letter – or rather a scurrilous note put together from odd bits of typeface cut from a book. The slur was laughable – that the Burton’s were anything but brother & sister – and quickly discarded in the fire. But they were far from the only people receiving such missives. It would seem that the reputation of peace and quiet in the countryside was somewhat of an exaggeration. As the letters became the talk of the town people began to wonder just how much truth there was in the torrent of accusations. After all, some said, there’s no smoke without fire. Others regarded as a trivial nuisance, something else to gossip about on the High Street. Until that is Mrs Symmington commits suicide not long after receiving a particularly scurrilous note. But if she killed herself the accusation must’ve been true – right? If she killed herself. The police, as always, move slowly. As suspect after suspect is eliminated from their list a concerned member of Lymstock’s community calls for outside help. Her friend, Miss Jane Maple, is only too happy to oblige.

I am, as I’ve said before, a HUGE fan of Miss Maple in particular and Agatha Christie novels in general. I don’t think I’ve read a single one that I didn’t like. This was a total delight. The setting was classic Christie in small town/large village southern England. The cast of characters – in particular the two main ‘leads’ of Jerry & Johanna Burton were brilliantly drawn as was the ‘love interest’ Megan Hunter, a 20-something ex-student ignored by her family and at a loose end. As usual, it seems, Miss Marple only appears around 75 pages before the end of the book once the crime has been committed and once the reader has already amassed most of the information required to solve the mystery and point a finger at the killer. I was about 90% confident that I had done so but found that I was wrong (although I still maintain with very good reason!). As I said a total delight from beginning to end and, being quite short, a fast read. Interestingly, being published in 1942 at the height of WW2, the on-going war not only receives no direct mention but hardly a hint. The only possible connection with the on-going global conflict was the fact that Jerry Burton had been injured in a plane crash although no mention was made of him being shot down or anything like it. I suspect this was very deliberate and that the tale was designed by the author to be a work of escapist literature in order to take people’s minds off the war. I’ve already bought the next book in the Miss Maple series and will be scheduling it in as soon as I can. LOTS of fun on multiple levels and highly recommended for anyone looking for a period mystery to take your mind off things for a few hours.

Posted by CyberKitten at 3:42 pm

its great to see Agatha on the CK board! i've a long history with her books; never read one i didn't like...

Hard to believe that it's been nearly 3 years since my last Christie/Marple review. Hopefully my next one won't take that long! [grin]

I haven't read this yet, but I'm slowly working my way through all the Marples so I will get to it eventually. I've also noticed that Christie's 1940s books rarely or never refer to the war - definitely intended to be escapism, I think!

@ Helen: I promised myself a while back that I'd read all of the Marple books in order. I'm progressing (slowly) towards that end. SO much else to read though. I suppose that there's no actual rule to say that novels should contain current events [grin] but it was very noticeable here. But as you say - pure escapism!