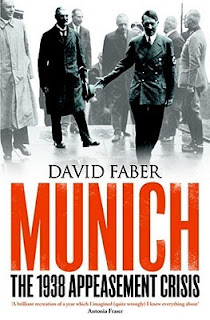 The Munich Crisis of September 1938 was a long time coming. With Hitler taking his place as Chancellor in 1933 a new spirit was growing in Germany and the rest of Europe was struggling to accommodate it. Some, of course, saw the German demands as quite reasonable. Others saw danger coming and pledged a hard-line to any demands for a degrading of Versailles or giving in to Germany’s growing territorial demands. But Germany wasn’t going to wait around for other countries to give her what she knew was already hers. Emboldened by a lack of response to repeated breaches of the Versailles Treaty the new German government publically, if metaphorically, ripped it up and proceeded to ignore it. The re-occupation of the Rhineland by German military forces followed – protests rang out, most especially in France, but again nothing was done. As Germany got more of its demands handed to it without any significant cost it was time for a bigger push – the unification of Germany with Austria denied them after the armistice in 1918. The German military in particular knew of the risks. They had been undermining any democratic forces inside Austria for some years but still, if France and Britain strongly objected and threatened war what could be done. Combined they could, it was believed, overwhelm the existing German forces who were still in the process of modernisation. But Hitler was adamant and the Anschluss went ahead – and STILL the French and British did nothing but protest. Now only two more territorial advances remained to play for – the German Sudetenland on the borders with Czechoslovakia and the Eastern border with Poland. But first things first – the Czechs.

Here things were more complex and more dangerous for the Germans than the recently completed Anschluss. Czechoslovakia had a treaty with France which obligated them to come to the Czech’s aid if attacked. Likewise Britain had a treaty with France to come to *her* aid if attacked. So, if Germany attacked Czechoslovakia and France attacked Germany in response then Britain would be obligated to come to France’s aid. This would mean a European war – only 20 years after the catastrophic Great War had ended. Both France and Britain were VERY keen to avoid this. Despite both increased military spending by both France and Britain (against much opposition in both countries) it was considered by both governments that neither of them were ready – alone or together – to face war with Germany (and most probably her Italian ally). Oddly of course at this point – 1938 – the German military command thought that they could not face a war with France on her own never mind in combination with Great Britain. In reality it’s probably arguable that ONLY Germany was in a position to wage modern war in 1938. Such thoughts were at the heart of the decisions about the Sudetenland in the cabinets of Paris and London. There was only one thing to do – negotiate. But how? The standard way, for centuries, was to hold an International Conference. This would have taken place under the League of Nations but Germany had withdrawn from it 5 years earlier. It was time for something new, something dramatic and direct – it was time for a face-to-face meeting with Hitler in the first example of what would later be called ‘Shuttle diplomacy’.

Of course the Munich Crisis of 1938 is remembered for what it failed to do – prevent a world war which erupted onto the world stage a mere 12 months later. Others see it as a real attempt to avert war despite the ultimate outcome. That extra year allowed Britain (at least) to ready itself for war with Germany and place itself in a much better position to fight a prolonged conflict in Europe and, inevitably, the rest of the world. It also showed the world that no matter what Hitler was given he would always demand more and that the only way to stop him was at gunpoint. By the time Czechoslovakia had been sacrificed to (hopefully) satisfy the German behemoth there was no longer another option available so, when the panzers rolled into Poland in September 1939 there was no attempt at further diplomacy and Britain declared war on 3rd September – World War 2 had officially started.

After just reading ‘Munich’ by Robert Harris previously I was immensely impressed by how much of the real events made it into the novel. This detailed and honestly gripping narrative of (essentially) one man’s efforts to avert another European war quite often read like a political thriller. Most of the ‘action’ took place in smoke filled room (unless Hitler was there who HATED cigarette smoke) where government ministers and officials argued the toss and hammered out various ‘agreements’ between the 3 Powers (Czechoslovakia was barely involved in the negotiations and was hardly consulted at all). Interesting all those involved on the British and especially the French side knew exactly how odious their treatment of the Czechs was. They were fully aware that they were basically throwing a whole country to the wolves (no one really believed that Hitler would simply stop after assimilating the Sudeten Germans into the Reich) in the hope that Germany would finally be satisfied and leave them alone. The French could barely contain their shame at reneging on their treaty with the Czechs and largely left Chamberlain the run things – which more than suited the British Prime Minister who insisted throughout that he should be at the centre of things.

If you’ve read and enjoyed the fictional account of the 4 days in Munich by Robert Harris and wanted to know more about what actually went on then this is most definitely the book for you. Likewise if you want to know how the world slipped into another World War this will go a long way in that direction. MUCH more to follow about this pivotal moment in world history. Highly recommended.

Posted by CyberKitten at 5:05 pm