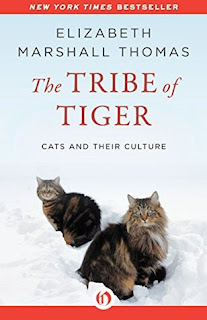 As my regular readers will know I have a love of all things Feline. OK, maybe not *all* things – litter trays, spraying & cat urine…. NOT nice!! But MOST things feline. Growing up we never had cats because my mother really doesn’t like them. We had just about everything else though, from snakes, fish, a whole host of birds and rabbits as well as various rodents. Just not cats. It was only in my late 20’s that a cat almost literally fell into my lap and I had her (or she had me – it’s hard to tell) for the next 16 years.

As I only ever had a single cat I could observe her behaviour as an individual but I never directly observed (at least not close up) how cats acted around each other – siblings or not – so I never experienced anything that could be called ‘culture’. The author recognised that her use of ‘culture’ in this regard was, at the very least, controversial but stuck to her rather unscientific guns throughout this chatty and often fascinating look at cats – both large and small. Hopping between her day to day experiences with several generations of house/farm cats, her stays in Africa with various local tribes and their contacts with lion populations and her encounters with large cats in North America this was much more than the standard ‘Why your cats does X’ book you often find in pet stores. With a family background in Anthropology, although not being a trained anthropologist herself, she has a number of interesting insights and ideas regarding both territoriality in cats and their social hierarchies – even in unrelated house/farm cat groupings. Using the more domesticated and more familiar house cat as reference the author shows how their behaviours are much more explicable when related to their much larger brethren on the African savanna or in the wild places of North America. Although I no longer have a cat I found this to be both an interesting and often heart-warming read from someone who really knows her subject and whose love of these creatures shines through on every page. Full of personal stories from both Africa and the States this was a delight from beginning to end and often felt like spending time with a favourite Aunt in a cosy room at the end of a long and productive day. Definitely a must read for all cat lovers out there. Recommended.

Posted by CyberKitten at 3:35 pm


I think Tribe of Tiger was one of the VERY first books I ever read during my blog tenure, but I don't remember a thing about it besides its cover.

@ Stephen: Well, it's difficult to spot. After all I hardly ever post cat related items here [lol]. I didn't know you'd read this. I'd never guessed YOU liked cats. More of a dog person!

BTW - Your latest politics postings are inspiring me (again) to read more political stuff we can argue about [grin]. Nothing in the review pile though (some classics coming up next plus a book that got me interested in Baseball!). I do have a few on Democracy in my 'Read Next' pile which you might find of interest.

Did you manage to get your hands on any of the Ancient Egypt novels I mentioned recently?

we used to have a Manx that was more like a dog than a cat: intelligent, affectionate and considerate... i miss Chunky...

Mm..... I don't know if I'm either/or! I've had both and neither. Cats are lower maintenance, but I'm generally not a fan of critters in the house -- my Idgie comes inside to sleep and shelter from rain, but she's confined to the initial area of the house. I find dogs more personable, but cats are probably easier to live with.


I haven't decided on an Egyptian read yet -- I've been preoccupied with the Romans, and yesterday I noticed a book on Athens I'd wanted was on sale. I'm about to finish a collection of Cicero's writings and will then be trying to finish the Octavius vs Mark Anthony book. I'd like to do an AE read as part of a series of HF around the Med. One in Egypt, one in Persia, one in Greece, that sort of thing.

@ Mudpuddle: Cats are endlessly fascinating I find & VERY friendly (if you get the right one). They're easy to miss.......

@ Stephen: Cats are definitely easier to live with! No walking with them no matter the weather [grin]. I have a few books based in Constantinople @ various ages if you're interested in their titles...

I love cats and they generally like me, however I'm allergic and thus have never been able to live with one.

I’m not a cat person in general, but there was a wild cat who first tolerated me, then made her home with me, and brought her kittens as well. I loved watching her with her kittens outside when she didn’t know anyone was watching. She “spoke” to her kittens with what sounded like gurgling vocalizations. It wasn’t purring or meowing, which was all I knew of cat sounds, and I could hear the differences in intonation as she spoke in affection as opposed to training with them. I’ve never had another cat, and I’ve never heard those sounds from any other cat I’ve been around. I miss her.

@ James: That's a real shame. Do you have any objections to the GM'd ones that are (supposedly) hypoallergenic?

@ V V: How interesting! I've seen video of cats 'talking' (which I'm sure that's exactly what they're doing) which is pretty amazing. I once 'meowed' to my cat and the look on her face was of pure astonishment as if I'd actually *said* something she understood. It was hilarious. Only happened once though. Mostly she just ignored me or figuratively rolled her eyes.