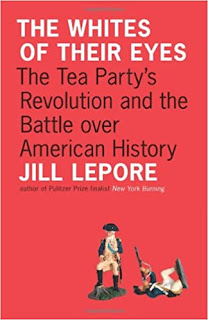 Just Finished Reading: The Whites of Their Eyes – The Tea Party’s Revolution and the Battle over American History by Jill Lepore (FP: 2010) [175pp]

I will be the first to admit that my knowledge of the American Revolution/War of Independence is…. Somewhat limited. My knowledge of the factors running up to the break with Britain and the people involved (including the ‘Founders’) is likewise sketchy at best. I am planning to dig into such things in the near future (probably showing up in my review pile next year at the earliest) but for now what little I did already know has been enhanced (somewhat) by this excellent little book. But, as you can no doubt tell from the sub-title, this slim volume isn’t wholly about that event. It’s about how the Revolution is thought about today (or actually back in 2010) and how it’s being used – and abused – to promote a certain political ideology.

The author most definitely knows her ‘stuff’. She a Harvard professor of American History and a Pulitzer Prize nominee. So you can imagine how pleased she was with the renewed interest in the founding of America – her specialist subject. She was less pleased, however, to discover exactly what those on the Right (and especially on the far-Right) had been saying about the history of the Revolution and, of course, the practically sanctified ‘Founding Fathers’. Of course most countries have their founding myths but such a modern country as the United States also has a lot of documentation (and research!) covering that period which can be access and compared to the myths that surround it. More often than not the myth does not do well when it meets the historical facts of the case. Myths do, of course, have their uses especially to those who want to clothe their particular political beliefs in the ideas and ideals of the Founders in order to gain credibility amongst their followers. Inconvenient facts, opinions and documents – even by the Founders themselves – need to be side-lined, disputed or (best!) ignored and forgotten. This is what the author discovered to be the case, not only at grass-roots level where it might be expected but also in the leadership of the movement who had invested in a particular image of the Revolution that was too often cherry-picked from the facts at hand. For those the myth and the image of the Revolution had become far more important and, more importantly, far more usable than the messy and inconvenience truth of the matter.

Looking across the Atlantic Ocean it has always confused, confounded and somewhat amused me how (apparently) many American citizens revere the Declaration of Independence as well as the Constitution and have deified the Founding Fathers who contributed to them. I can certainly understand interest in them, study and serious thought but reverence? That, to be honest, might just be my reaction – being the cynical atheist that I am. I don’t tend to revere anything or anyone. But it is clear, even from the little I do know of these times, people and events, that the Founders were VERY human. They were not gods or in the least god-like in intelligence or moral judgement. Nor are the documents they produced or the Republic that grew out of them perfect or anywhere close to that. No doubt when I dig deeper into the subject I’ll discover just how messy, disorganised, partisan and imperfect the whole thing was. Long running disagreements, enmities and questionable compromises are scattered like spent musket balls throughout the deliberations. The result was far from perfect it was, in fact, human. To mythologise the Revolution and its many protagonists is to do it a dangerous disservice. To understand it and to learn from it requires actual knowledge of the real history of the events – warts and all. I’ll be seeing if I can do that… Recommended and much more from this author to come.
Posted by CyberKitten at 4:21 pm

i spent some time doing that once, fifty years ago, maybe, and came to the conclusion that they were a bunch of political hacks trying to finagle as much money and power as they could without getting blamed for how they got it...

So... pretty standard politicians then? [lol]

Nonsense, mudpuddle. There were creeps along the lot (looking at you, Alex H), but a lot of them were idealists in a rare moment in history who were doing their damndest to create a brighter future for all who followed. Having read of Adams' long study of political institutions, for instance, or of Washington's principled refusal to aggrandize himself, I regard them as exceptional men.

@ Stephen: As I know little about the people involved I can't possibly comment. From what little I do know about them they were flawed individuals - AKA human beings, even quite possibly exceptional ones. But future reading will help me determine that! [grin]