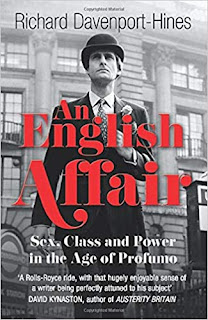 Just Finished Reading: An English Affair – Sex, Class and Power in the Age of Profumo by Richard Davenport-Hines (FP: 2013) [345pp]

When the Profumo Affair burst into the headlines in May 1963 it passed me by. As I’d just turned 3 years old at the time this is hardly surprising. No doubt my mother, seeing the headlines and maybe even reading further in the Daily Sketch stopped for a moment to ‘tut’ and maybe say something about “London people”. It was only much, much later that I was introduced to the scandal that was fully expected to bring down a government and tarnish ‘the establishment’ for years to come. Despite the fact that the ‘affair’, as I discovered in this often riveting book, was pretty much a storm in a tea cup (Earl Grey no doubt!) and a largely manufactured one at that, books have been written, documentaries made and movies produced laying out in great detail the seedy demise of respectable 50’s Britain and the start of the so-called ‘Swinging 60’s’. As nearly always with such historical ‘myths and legends’ the reality is somewhat different from that portrayed in the tabloid press at the time and in the subsequent sensationalist TV and movie adaptations.

Britain in the late 1950’s was still recovering from the Second World War. Despite the Prime Minister’s famous (or infamous) quote about the British people ‘never having it so good’ they clearly wanted more. Women especially had restricted lives, in the workplace, in public and especially in the bedroom. In an era before The Pill or easily obtainable abortions women were expected to be chaste before marriage and (re)productive afterwards. Motherhood was to be their primary role – or at least that was the expectation both from the general public and the Establishment. Naturally women, especially young women, would have none of that. Like youth everywhere they wanted fun and they wanted to have good times as often as possible. As always there were enough men, in both high and low places, who were more than willing to show them a good time. One of those men, in the early 1960’s was Jack Profumo who most definitely had an eye for pretty girls. Indeed he married one – film actress Valerie Hobson – in 1954. Not that this stopped him looking further afield. Enter Christine Keeler, an attractive 20 something brunette, who wasn’t bothered at all by Jack’s married status. One thing led to another and, as things do, they ended up in bed together. So much so sordid and little of national importance. Until that is it came to light who else Miss Keeler was sharing her favours with - Yevgeny Ivanov, the Soviet naval attaché. On its own even this wouldn’t have raised very many issues or eyebrows except for one very important factor: Jack Profumo was the Minister of War (back in the days when we had a War Department rather than a Ministry of Defence) so Miss Keeler’s sleeping arrangements had suddenly become a matter of National Security.

Interestingly, I was surprised to discover, it was nothing of the sort. Keeler (and her more flamboyant friend Mandy Rice-Davies) were what was known as ‘good time girls’ – young women out for fun and what they could get in a culture that artificially constrained their ability to do so. Keeler might very well have slept with both men but nothing in the way of classified pillow talk took place and, apparently, the Soviet’s either knew nothing of Christine’s other lover or made no attempt to use her to gain an edge. The whole ‘scandal’, such as it was, was created almost out of whole cloth (with a strong dose of ‘no smoke without fire’ thinking) in order to drive sales and settle scores with the incumbent government. What the affair did do – in spades – was to expose the depths of hypocrisy in the British establishment whose public face portrayed probity and yet, in private, was anything but. The ‘Affair’ itself, had the unfortunate fate of breaking in that brief ‘grey zone’ between the austere 50’s and the ‘swinging’ 60’s soon to break in Britain. As a prime example of a culture just about to change radically the Profumo scandal deserves the attention it has received and this detailed (sometimes too detailed to be honest which is just about the only fault I found with it) look at the events and people involved gives an excellent insight into an age when ‘everything was a-changing’. Definitely recommended for anyone interested in the Affair itself or the British transition to the 60’s.
[Side Note: This is the 100th reviewed book since I kept an accurate note of page length. So far the average is 332pp which is about 100pp more than when I started back last October. To date the High Score has been 338pp - still below the aim of 350pp+ but we're getting there SLOWLY. Hopefully I'll break 340pp this year and 350pp early next. Here's hoping!]
Posted by CyberKitten at 4:30 pm

i missed this... i was living in Chihuahua at the time...

I doubt if it was on anyone's radar outside the UK (and possibly Russia!). A mountain out of a mole-hill even at the time I think. Almost a scandal for scandals sake. Interesting insights into the attitudes of the time though.

Is there a reason the Minister for Silly Walks is on the front cover?

A generic picture of the stereo-typical British civil servant [grin]

Welcome Back to the land of the living online. Feeling MUCH better I do hope!!