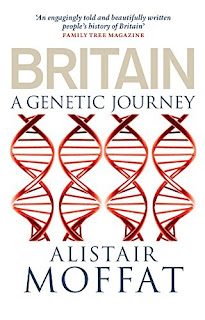 After ‘treating myself’ to a DNA ancestry test last year I was intrigued (actually more than a little confused) by the amount of “Scottish” DNA in my cells. According to my results I’m 36% Scottish which was, and still is, rather surprising as at least on my mother's side I have zero Scottish ancestors going back to the 16th century and none on my father’s side going back around 200 years. Needless to say, this has prompted some head scratching and book buying including this fascinating volume (the first of a significant number).

Although it certainly didn’t directly answer any of my questions concerning my mysterious ancestry, it’s given me some ideas, some baselines to work from and, rather inevitably, more ideas for book purchases including the authors companion work on Scottish DNA. Expecting an exclusive focus on the waves of immigration into the British Isles over the millennia I was surprised at how far back into deep time the author looked – indeed as far back as the human diaspora out of Africa as we populated the rest of the planet beyond where we evolved. One of the things that intrigued me most was when the author discussed Britain’s initial occupation just after the last Ice Age when glaciers retreated North and humans followed in their chilly wake. Of course, the interesting thing about that era is that the occupiers didn’t somehow sail across the English Channel, the North Sea or across the unpredictable Bay of Biscay because those features we know so well from satellite imagery had yet to exist. No, the first colonisers of Britain *walked* here across the ‘land bridge’ that connected Britain to mainland Europe. Now, I had always imagined that this ‘bridge’ was a reasonably narrow corridor across what is now the Channel from France which collapsed at some point to separate us from the Continent. I could not have been more wrong. The so-called ‘bridge’ was HUGE, not only across the area of the Channel but across much of what we now call the North Sea. Not only was the bridge extensive but it also lasted a LONG time after the ice retreated. Scans of the North Sea bed, undertaken by companies looking for oil and gas, not only discovered underwater river beds but signs of long-tern occupation and even stone circles now submerged. It is not unusual, apparently, for fishing boats in parts of the North Sea to dredge up PEAT off the sea floor! Things like that really blow me away and remind me that even present day geological and geographic features have not always been like this. But I digress!

Like much of the planet, Britain is a nation of mixed genetic heritage. Originally lightly populated by wanderers from the attached continent it experienced waves of colonisation (and conquest) from Anglo-Saxons, Romans (who located legions here from all over their Empire – some of which still show up in DNA clusters around original Roman camps), Vikings and Normans. On top of this there has been a steady influx of individuals and family groups from across the Empire and the world to these shores. All of them have had an effect on the genetic makeup of Britain’s DNA. My father relocated here, aged 10, from Southern Ireland in the late 1930’s. Further back, some of my mother’s Irish ancestors arrived in the Midlands around the time of the Industrial Revolution. Such has always been the case and probably always will be.

Whilst not exactly helping me very much with any of my ongoing ancestry questions or mysteries this was definitely an interesting and often fascinating read. I have at least 3-4 more books on this subject lined up which should give me a decent foundation for going forward in my quest to understand my genetic, historic and cultural heritage a bit more clearly. Recommended for anyone interested in Britain's genetic history and especially the history of their own land. Much more to come on this and associated subjects.

Posted by CyberKitten at 3:33 pm

Sounds promising! Will definitely take a look at this. I have a "Natural History" of the European continent that may pair nicely with this, particularly with information on ice-age Europe.

I have a few more like this - based around DNA - and the rest in the pile looks at more of the tribal elements. Probably too early to pick out any recognisable ancestors though! [grin]

I bought a 23 and Me kit. Haven't put it to use yet...will be interested to see if I skew more Anglo-Saxon or Celtic.

I was rather surprised by my results. I thought there would be more Irish DNA (I didn't realise that my Mother's ancestors mostly hailed from the English Midlands) and I was totally surprised by the percentage of Scottish DNA! Do you know where your ancestors are from - mostly? I found it very intriguing digging back 500 years on my Mother's side. I'm still pretty blown away by it all to be honest.