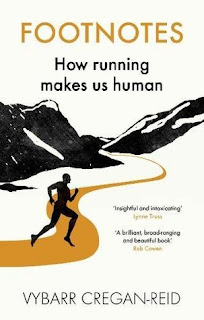 Like many children I liked running as a kid. In school, whenever we did track days, I was never particularly fast (despite, I've just learnt, having what has been referred to as the ‘sprint gene’) and usually came in the last 3-4 during the 100 metres and in the bottom quarter in the 200. When distances got up to 500 metres and then 1500 metres I was usually somewhere in the middle of the pack. It was only when we did what was euphemistically called ‘country running’ - essentially running 3 miles over semi-broken ground at the very edge of the school – that I came in the first 3rd of the bunch. Despite the fact that we often did these runs in pretty bad weather I often kind of enjoyed them (interesting I’ve also just learnt that I have some of the genes common to endurance runners). These days I don’t really run at all. I go for short walks when the weather permits and the last time I ran anywhere – not exactly a long distance – was a for a bus I didn’t want to miss. I was still impressed (after I caught it) by how quickly my breathing returned to normal, but then again, I’ve never smoked a cigarette in my life, so there’s that.

Like the author of this often-fascinating book, I’m convinced that humans are built, designed even (by millennia of evolution) not only to run but to run long distances. Our physiology, from lung capacity, to the Achillies tendon, to the number and position of sweat glands and a whole lot of other adaptations mean that we can sustain fairly impressive speeds for long durations. In the greater animal world both predators and prey are adapted to very impressive bursts of speed, to attack or flee, that we simply cannot compete with. However, where we naturally excel is endurance. I’ve seen it proposed (and I think we have more than anecdotal evidence to support it) that humans can outrun HORSES over long distances. This makes sense when you think about our hunting ancestors on the African savannah – a small group of humans stealthily approach a zebra or equivalent, a rock or spear is thrown (accurately!) and injures the prey, which runs off at high speed. The small group give chase in a lopping, ground eating, gait and eventually catch up with the wounded creature which has paused to catch its breath and off it runs again at high speed – only to stop again to catch its breath and cool down – but is forced to flee again as it sees the humans approaching. Gradually the prey animal either succumbs to blood loss or heat exhaustion and collapses – as a human approaches and finish it off with a sharp or blunt rock, and then walk back the ten miles they’ve just run to feed their tribal group. That’s why we both can and often enjoy running marathons – we were literally built for it!

With the author regularly running ten or more miles each time he feels the pull to do so, he has plenty of personal and theoretical knowledge to sprinkle throughout this work. With discussions of the pros and cons of treadmill, road and off-road running, the advantages of (and problems with) barefoot running, the types of running shoe and why some can cause more problems than the solve and SO much else besides this is both a treasure trove of information and just a fascinating insight into the world of the ‘casual’ non-professional runner. If you do run (either for fun or competitions) and haven’t read this book I, as a non-runner, can definitely recommend it. It hasn’t made me go for a run – yet! - but it did make me at least think about it and maybe go for longer more countryfied walks (at least!). A strange read for me, I know, but more on various aspects of running to come.

Posted by CyberKitten at 3:12 pm

I used to run, back in the days when I thought I was fat but in reality wasn't. Now I actually have put on some weight and miss running a lot, so I should get back to it again.

Would that be on a treadmill or outside? I see LOTS of joggers around here pounding the pavement... Mostly in the summer and especially just after New Year! Not sure if I have the dedication even if I had the intention to run anywhere.... [grin]

Outside. Treadmills are awful for me, I have to know I am really going somewhere, not just running in place.