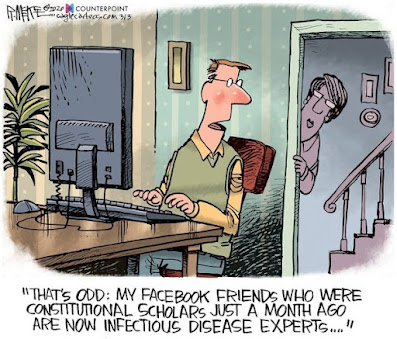 Not to mention eastern Europe and SE Asia foreign policy experts. I find it difficult not to make faces and yell when people want to repeat TV talking points to me about this-or-that situation and there's a half-century of context they're oblivious to.

It's what makes the idea of 'research' on Twitter, Facebook or Tick Toc so laughable. It takes TIME and EFFORT to become an expert on ANYTHING. But we do seem to be living in the age of 'instant experts'. [lol]

It reminds me of the ditty "When I was a Lad" from H.M.S. Pinafore. His journey took time but not much effort, but with absolutely no knowledge he became the Ruler of the King's Navy.

I blame the invention of instant coffee. I think it ALL started there.... That and TV 'dinners'.

The 'do your own research' crowd is utterly annoying at this point. Finding someone who agrees with your warped version of reality is NOT research.