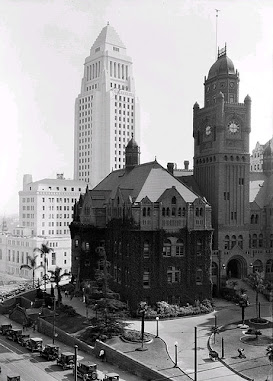 Posted by CyberKitten at 8:46 pm

does London have palm trees?

Not that I remember. I think the cold would kill them, or they'd drown with all the rain..... and then there's the pollution.....

I thought this was probably California when I saw the palm trees and did a reverse image search. Here’s the quote that was under the picture: “A great shot of the Los Angeles’ City Hall in the background (which is still with us, thankfully) and in the foreground the County Courthouse who somebody decided wasn’t worth saving.” Late 1920s

Yes, it is indeed LA City Hall off McCarthur Park. I recognised the building from 50's SF movies seeing it destroyed in 'War of the Worlds' and used in 'Them' to declare martial law!!