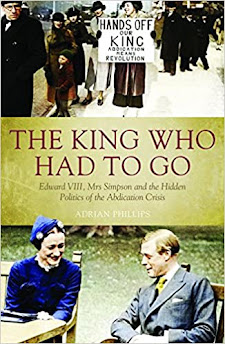 Just Finished Reading: The King Who Had To Go – Edward VIII, Mrs Simpson and the Hidden Politics of the Abdication Crisis by Adrian Phillips (FP: 2016) [345pp]

The Abdication Crisis of 1936 is yet another of those incidents in British history that I know of but know very little about. No more! What I ‘knew’ (or more accurately thought I knew) about the events essentially boiled down to the facts that the future King – Edward VIII – had formed a relationship with a women considered to be ‘unsuitable’ because of her prior divorce and chose, for the good of the Monarchy and Country, to give up the throne to his brother (who became George VI) because he couldn’t or wouldn’t give up the woman he loved. All very romantic and only partially true, but it was the story concocted for public consumption. As with most things the truth was rather more complex and a bit more sordid.

The problem was Edward himself. Young, wilful, not too bright and full of his own self-importance and privilege he was determined to have his own way and decide his own life – regardless of his position or his role as sovereign. If he was to be King, he thought, then he could do what he damn well pleased and the fly-by-night politicians would just have to deal with it – and him. Unfortunately for Edward the days of absolute (or even quasi-powerful) monarchy was long gone and the days of a more free monarchy had yet to come. Wallace Simpson was unsuitable for a whole list of reasons. Her previous divorce was one of them. Divorce in 30’s Britain was still difficult, expensive and socially consequential. What was worse in this case was that she had remarried and would need to be divorced for a second time to marry the future monarch. Naturally Special Branch – essentially the UK’s political police force – investigated Simpson and discovered evidence that she was actually engaged in two affairs, on with the future King and another (simultaneously) with a younger man. What made things worse was that Edward refused to hide Wallace in the background (as the Prime Minister expected a ‘respectable whore’ to behave) but entertained her on his yacht and took her to events and official meals. One politician’s wife refused to go to any event where Wallace might be invited because she didn’t want to be introduced to a ‘whore’. You can see a theme here. What made things worse – something that Edward was good at – was his insistence that Wallace became Queen rather than his consort. The Prime Minister was not alone in the idea that the country would not stand for that, indeed some of the Commonwealth/Empire leaders made it quite clear that the integrity of the Empire itself might be called into question if the marriage went ahead and Wallace was crowned. The brewing constitutional crisis might well become an Imperial crisis with the growing clouds of a European war on the horizon.

Told in fascinating detail this is the story of the political machinations that were going on in the background between politicians, civil servants, newspaper moguls and hangers on to either keep the King on the throne, remove Mrs Simpson from the scene (only half-jokingly was the idea of ‘knocking her on the head’ floated) or having his reluctant brother take up the role of monarch so things could blow over. The whole story gives a real insight into late 30’s British society, the coming war (increasingly on everyone’s minds) and the future of the monarchy – still resonating today. As one who is most definitely not entranced by royalty I did find this narrative completely captivating and felt that a gap in my knowledge of British history had been very well closed. Definitely recommended for anyone who has heard of the Crisis and wondered what all the fuss was about.

Posted by CyberKitten at 3:56 pm

well, things could be worse... and they often are...

Definitely could have been worse - he might have become King!