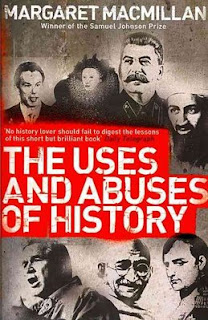 What can we learn from History, apart from the fact that we seem to learn very little indeed from our past? This is just one of the intriguing questions raised by this fascinating little book. History, as all readers of non-fiction know, is not simply a statement of what happened in the past. Being story telling creatures, as well as meaning seeking ones, we look at History to produce a narrative – a coherent story. In order to do that the actual historical record needs to be manipulated, massaged and packaged in such a way that what we regard as a meaningful story arises from the chaos of real life events. The problem then is just what kind of ‘History’ is the end product of that process and, more importantly, what can it be used for.

History, as we all know, is usually written by the victors. Orwell was quite correct when he put these words into the mouth of his ‘1984’ protagonist Winston Smith: “Who controls the past controls the future: who controls the present controls the past…” Control of History is sought after by those who need to define their origins – as a group, a people or a nation – so that they can shape their future. Nations often have foundation myths that they hold onto tightly and fight to preserve despite the messy reality of what actually happened. Of course if an origin story is missing it can always be created or ‘enhanced’ in such a way to legitimate the policies or positions of those in power centuries later. Control of past events helps solidify power in the present. Likewise revolutionary forces can use past events and past heroes (most especially if said ‘hero’ has biographical details that are historically “fuzzy”) in order to bolster support and justify actions that would be in normal circumstances questionable or actually unjustifiable. History can also be used to bind multiple peoples or countries together in the name of past debts or past agreements. ‘Special [Historical] Relationships’ can be invoked to justify going to war against countries that pose no direct threat to another’s national security, an ancient prophecy can be used to define modern international relationships and so on. History, real or far too often imagined, can have real world consequences in the here and now.

Knowing how History can be manipulated, suppressed or simply ignored for a whole host of reasons the author – a celebrated historian herself – calls on more historians to help fill the increased desires of the reading public with works of accessible but quality history texts rather than leaving it to non-historians (too often flouting actual historical research and rigour in favour of a good story that can sell copy) to fill out bookshelves and either mislead or confuse readers about what really happened in the past. Popular history doesn’t need to be bad history is her message and good history can provide the foundation not only for a true understanding of the past but a clear-eyed understanding of the present – and the future. A quick read and an interesting one which leaves you wondering about the idea of history and how it’s constructed and, more importantly, why it’s constructed the way it is. Recommended.

Posted by CyberKitten at 4:18 pm

"and the the truth shall set you free" (but only if you can figure out what it is, lol)

I think my favourite Truth quote is: "Seek the Truth though the Heavens Fall". It's where I got my Blog title from.

History, like religion, is meaning-making.....even if we stick to the facts, the facts we choose and how they're presented can tell a different story.

@ Stephen: Correct! Choosing what you pick out of the messy morass that is 'history' to create a narrative - even when attempting to be as neutral as possible - inevitably puts a 'gloss' over the facts of the case. That's why if you're reading about a period of history, an historical event or an historical personality you should read as many books on the subject as possible. Each will have a different slant and use different facts to get the point across - and that's even before we get into the realm of 'alternative facts' - or as most people call them 'lies'.