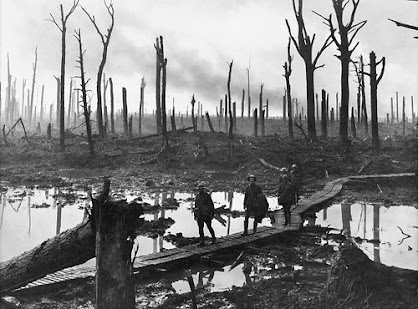 Posted by CyberKitten at 5:04 pm

Email ThisBlogThis!Share to TwitterShare to FacebookShare to Pinterest
Labels: WW1

Probably. There'd definitely be enough dead bodies out there to build a zombie ARMY!

Soldiers of an Australian 4th Division field artillery brigade on a duckboard track passing through Chateau Wood, near Hooge in the Ypres salient, 29 October 1917. The leading soldier is Gunner James Fulton and the second soldier is Lieutenant Anthony Devine. The men belong to a battery of the 10th Field Artillery Brigade.

The Battle of Ypres was the first time poison gas was used in the war, right?